Professional hockey players should not play in Olympics 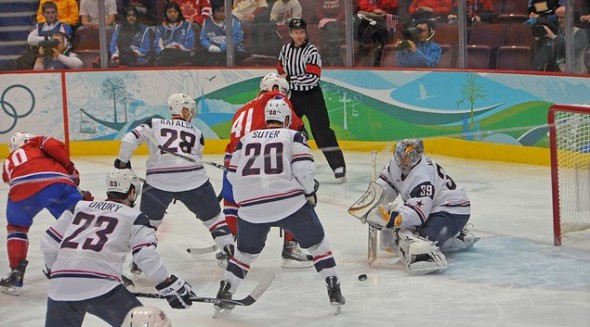 Players from the National Hockey League have been allowed to participate in the Winter Olympics since 1995. Photo by: roaming-the-planet / Flickr

Every four years when the Olympics come around, there’s talk about whether professional hockey players should be allowed to compete in the Winter Olympics.

In all honestly, I think pro hockey players should not be allowed to compete in the Olympics, mainly for two reasons: fame and fortune. A little more than half of the men’s hockey players compete in the NHL, and some teams are made up entirely of NHL players.  The 2014 Olympics is Sochi, Russia, should mainly be comprised of amateur athletes representing their country.

Amateur hockey players should be the ones putting on their country’s jersey because they play the game out of love, not for money. Most Olympic athletes receive monetary support from their country, but these amateur players would much rather play for the love of the game. Many NHLers already make seven figures per year and compete in an 82-game season, sometimes more. They’ve already made it to the top of the hockey level, and it’s time for them to let amateurs take the Olympics. Maybe these amateurs competing in the Olympics can get noticed and move on to a higher level of hockey, such as the NHL.

Also, the NHL players already have the fame in the sport, so why not step aside to let the not-so-popular players noticed? Let the countries show how good they are by the amateur players they can produce, not by how many NHLers they can send to the Olympics.

Five words: 1980 USA Olympic Hockey Team. Done. That’s all that needs to be said. This team was a true Olympic team, consisting of 20 college players who ended up beating the supposed unstoppable Sovies. Those are the teams I want to see in the Olympics, and I’m pretty sure I speak for most hockey fans on this one.

Herb Brooks nailed it when he said, “All-Star teams fail because they rely solely on an individual’s talent,” and this quote can go both ways, for All-Star teams and for Olympic teams. The Olympic hockey teams would be better and more fun to watch if they consisted of amateur players because they wouldn’t rely on an individuals talent. Instead, they would work as a team just like the 1980 team did.

Allowing only amateur players in the Olympics would allow for them to showcase their skills to world,  and to let the world see outstanding amateurs they wouldn’t have been able to see if professional hockey players were allowed to play.

John Scott is a junior at Cody High School and longtime youth hockey player in the Wyoming region.