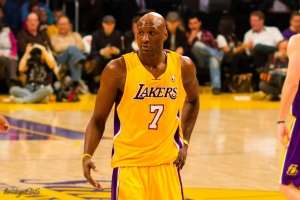 The L.A. Lakers traded Lamar Odom to the Dallas Mavericks for cash and a future first-round pick this offseason. Photo by Bridget Samuels/Flickr

Lately I’ve been finding myself arguing or disagreeing with people about the Los Angeles Lakers.

It’s funny to me because I’m not a huge fan of Team Kobe. I’ll admit that the boys in yellow and purple are fun to watch. I would even like to see them win the NBA Finals again because I respect Kobe Bryant as a player. And because those are my feelings, I’ll go to bat for the Lakers from time to time. I have recently defended L.A. because a lot of their fans do not like the fact that the front office traded Lamar Odom for nothing and weren’t able to make successful swaps for either Dwight Howard or Chris Paul.