Couch Side Podcast — Episode 26: Status of the NBA 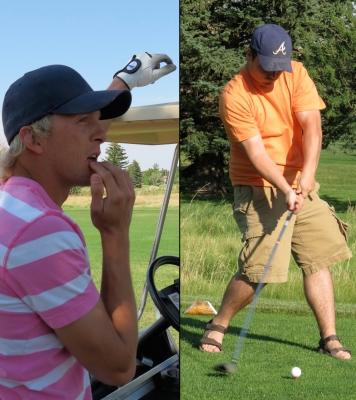 Couch Side hosts Craig Paul (left) and Wade McMillin were able to hit the links over the weekend before slaving over hot microphones Monday night.

In this week’s episode, hosts Wade McMillin and Craig Paul take a deep look into the NBA as a whole, questioning if the league is better after the Dwight Howard trade. The gang also continues their official 2012 NFL Season Preview, breaking down the AFC West. And in this week’s segment of the Head-to-Head Honchos, Craig and Wade discuss the importance of the running back position in Fantasy Football lineups. To start listening, downloading and/or subscribing to the Couch Side podcast click below. Also, if you live in the Big Horn Basin of Wyoming, don’t forget to tune in to 89.1 FM KNWT ever Wednesday at 4 p.m. or every Friday at 9 a.m. to listen to the show on the local airwaves.

Click here to stream Couch Side Episode 26: Status of the NBA via out host site, Talkshoe