What Oakland Athletics fans can expect from Manny Ramirez

Major Leaguer Manny Ramirez is suspected to join the Oakland Athletics some time next week. Photo by: Ethan Bagley / Flickr

After two long suspensions for failing two separate drug tests, it looks as if Major Leaguer Manny Ramirez will once again return to the diamond for yet another short stint in baseball.

Except this time, the 40-year-old won’t be coming back to a marquee team. Instead he’ll lace up his cleats fore the underachieving Oakland Athletics, who rank dead last in overall offensive production, sometime next week. Will Ramirez be able to provide a spark to this dismal offense or stay clean for an entire season? It’s possible, but as my British friends say, ‘it’s not bloody likely.’

I have to believe that Ramirez can last the rest of this season without failing yet another drug test. However, it’s a stretch to think he can add much to Oakland’s pathetic offense, which is batting a majors-low .211 as a team with just 42 home runs, 162 runs and an embarrassing 384 strikeouts to 159 walks. END_OF_DOCUMENT_TOKEN_TO_BE_REPLACED

Out of left field: Cespedes agrees to terms with A’s

It seemed like the young outfielder’s decision wouldn’t be made until Spring Training rolled around and it appeared like the Miami Marlins had the bait to sway Cespedes to Florida. But in a surprising move, the Oakland Athletics shocked the baseball world by signing Cespedes to a four-year, $36 million deal Monday. For the entire offseason, the A’s looked as if they were going to settle into their ways of dumping young talent while trying to build a competitive roster with a very low payroll. This signing was the complete opposite of that, throwing the entire MLB a major curveball that not a lot of people saw coming. END_OF_DOCUMENT_TOKEN_TO_BE_REPLACED

Put a mark on the wall. 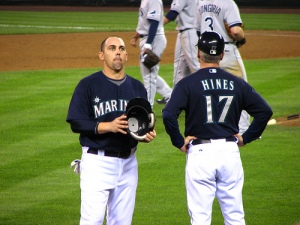 The Atlanta Braves finally made a move this offseason, signing free agent shortstop Jack Wilson to a one-year deal Friday. The move brings Wilson back to the Braves after Atlanta acquired the 10-year veteran late in the season. Inking Wilson to his $1 million deal is just the third major league transaction Braves General Manager Frank Wren has made this winter and it was more like a resigning than a true free agent deal because Wilson actually started in Atlanta’s 162nd game last season.

So once again, Atlanta’s inactivity has left fans yawning at best. However, some are happy with the deal because it was a cheap solution to one of the Braves’ glaring holes. Signing Wilson is safe. He is durable and plays good defense, hence his .977 lifetime fielding percentage. It’s just hard to get excited about a guy who knocked in just 11 runs in 214 bats last season.

END_OF_DOCUMENT_TOKEN_TO_BE_REPLACED

The Oakland Athletics were back at ruining their chances of ever sniffing the playoffs for at least the next ten years by trading all-star closer Andrew Bailey on Wednesday evening.

Oakland General Manager Billy Beane shipped the 27-year-old to the Boston Red Sox after trading starting pitchers Trevor Cahill and Gio Gonzales earlier this offseason. The third major move by the Athletics this winter has now left the team’s pitching staff depleted and it doesn’t look as if Oakland will have one household name on its roster by the time spring training rolls around. They still could have guys like Daric Barton and Kurt Suzuki still around, but don’t pencil them in on your scorecards until at least opening day because Oakland changes its makeup more times than Lady Gaga at a sold out concert.

Once again, the A’s received a heap of very young prospect and the organization should be delighted that their farm system should be one of the best in baseball. But none of the guys Oakland has acquired yet, are considered everyday Major Leaguers by anyone’s standards. For Bailey, the A’s received outfielder Josh Reddick, first base prospect Miles Head and pitching prospect Raul Alcantara from the Red Sox. Oakland also shipped Ryan Sweeney to Boston after the outfielder spent the past four years with the A’s, primarily as a starter.

So it looks like Boston received the better end of the deal. No duh. That should be expected by this point by any Oakland fan. These moves seem like MLB suicide, but the transactions are completely necessary for Oakland’s future plans. It’s reported the A’s will move to San Jose sometime in the near future and to help pay for a new stadium, the club is trying to save money anyway possible.

That has left Beane in quite a predicament. I don’t think he’s ever seen a budget this small and now he’s going to have to fill a roster with only peanuts to offer. His three mega moves this offseason are just the start. And don’t be surprised if his highest paid player makes somewhere in the $4 million per year range. It’s always been like this is Oakland and it always will be, at least in the baseball market where money rules.

END_OF_DOCUMENT_TOKEN_TO_BE_REPLACED

The Oakland Athletics have reportedly traded starting pitcher Gio Gonzales to the Washington Nationals on Thursday for four prospects. Photo by: Mark Terranova/Flickr

It seems like the Washington Nationals of all teams could have the best rotation in the National League East next year.

After weeks of rumors about several teams trying to acquire Oakland Athletics starter Gio Gonazles, it was the Nats who swung in and got the deal done. Via Twitter, ESPN.com’s Keith Law reported the Athletics will ship Gonzales to our nation’s capital for prospects A.J. Cole, Derek Norris, Brad Peacock and Tom Milone. The acquisition of Gonzales gives the Nationals another strong arm to go with a projected rotation that also includes Stephen Strasburg, Jordan Zimmermann, John Lannan and Chien-Ming Wang.

I predict Gonzales will probably wind up as the club’s No. 3 starter behind Strasburg and Zimmerman, but having him in the middle of the rotation is a lot more than most teams have. And if Gonzales pitches like he did in 2010, the Nats might end up as the winners of this deal after dealing four highly-touted prospects. Last season, he started out great, but blundered in the second half after making his first AL all-star team in just his second year in the pros. That might make the trade a bit scary for Washington if Gonzales continues down the path of mediocrity. However, if Gonzales can eat up 200-plus innings like he has done for the past two seasons and stay consistent with his 3.23 ERA during that same span, it will be the Nationals who reap the benefits.