How the West (and East) was Won: A Look at the NBA Playoff Picture

If you would have asked us this past summer who we thought would win the NBA Championship, I’m sure we would have had three answers for you: the Miami Heat, the Oklahoma City Thunder, or the most likely scenario, no champion at all.

With the lockout breathing down the NBA’s neck, it was hard to have realistic expectations for a 2011-12 NBA season.  Though the shortened schedule has led to its share of surprises (I’m looking at you, Utah Jazz), the older mainstays have managed to stay true to form and the young, upcoming teams have seemingly dominated a shorter, more physically daunting schedule (with the exception of the San Antonio Spurs; how does Popovich do it?).

Now that the regular season is over and the match-ups are set, it’s prediction time, and who better to run down the NBA playoffs than two diehard fans?  We will admit our last article was a WWE-themed article, so it’s time to pop our cherry once and for all and tackle a real sport. 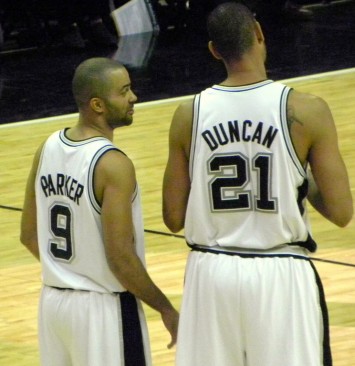 Tony Parker and Tim Duncan were together for the San Antonio Spurs' last title run and will look to do the same this season. Photo by: Brit / Flickr

Matt: I was a little disheartened to see the Jazz easily dismantle the Phoenix Suns this past Tuesday, breaking the hearts of Phoenix fans while ensuring Utah’s trip to the postseason.  Now that it’s all said and done though, I have a hard time picking either of the two against the Spurs.  Though San Antonio showed last year that one-seeds aren’t unbeatable, I don’t see them losing two years in a row in first-round upsets.  Plus, Utah’s front court players (Derrick Favors, Al Jefferson, and Paul Millsap) aren’t nearly as intimidating as Memphis’ combination of Zach Randolph and Marc Gasol a year ago.  Expect a pretty lopsided series in my eyes where the veterans show the young studs a thing or two about postseason basketball.

Brett: I spent last Tuesday night at Matt’s house, watching the Suns/Jazz battle it out for a playoff spot while simultaneously writing our Extreme Rules predictions. When the triple zeroes hit and the Suns had lost and missed out on a chance for the final berth, I was left not heartbroken nor happy, but relieved. Because I knew that I would not have to watch the Suns endure a humiliating first round exit to the Spurs, which is what the Jazz will encounter. San Antonio is a deep team, starting with their Big 3 of Tony Parker, Manu Ginobili (bleh) and Tim Duncan, the greatest power forward ever. Their bench is young and talented and the late-season acquisitions of Stephen Jackson, Patty Mills and Boris Diaw were solid. The Jazz are young but inexperienced in the playoffs and will have trouble containing the Spurs on both ends of the floor. This one should be a cakewalk for San Antonio.