The Couch Side All-time NBA Fantasy Draft concluded about a week and a half ago. The teams were picked. Judges have dished out their decisions and we have a winner! For those of you who didn’t get a chance to listen to these special edition podcasts, click here to access them via iTunes or follow the links and clicks below:

Now that access to the All-Time NBA Fantasy Draft has been granted, let’s unveil the teams and how they were ranked. Couch Side asked three judges, Chris Etling, Chuck Constantino and Vin Cappiello to rank the teams one through five, based on talent and how the team would mesh. A very huge thank you goes out to those judges, especially Chris, who offered a deep analysis of each squad. You can check out more of Chris’ works and podcasts by visting his blog site, atthebuzzershow.com.  Here’s a look at that analysis, team rosters and how the voting broke down of Couch Side’s top 100 NBA players of all time by position:

• Analysis by Chris Etling: At first glance, this lineup looks bizarre to me. Then I start thinking about the synergy of offense and defense that the starting five can bring, and I change my mind. Robertson changed the point guard position with his blend of scoring, rebounding and passing, and he’ll have two tremendous shooters in Durant and Miller to help space the floor. That gives Abdul-Jabbar and Duncan plenty of room to operate in the post where they’re most effective. Defensively, Duncan helps cover for Kareem’s deficiencies, and the rest of the lineup is solid. The bench includes the enigma that is Pistol Pete and some rock-solid players like McHale and Thomas. And since this team is playing for pride and not an NBA title, Patrick Ewing might actually contribute.

• Championship comments: “I had a lot of fun teaming up with five fellow NBA fans to take a look at the past, present, and future of the NBA,” Vinsko said. “I’m happy my knowledge of my favorite sport has led me to make the decisions I did regarding drafting. I had a blast researching the best players at each position to put together what I deem a super team, and thank everyone involved for putting this together. I think a similar draft or panel in the future would be equally stimulating, and hope to continue contributing anyway that I can.” END_OF_DOCUMENT_TOKEN_TO_BE_REPLACED

Quick read: Dwight Howard says Kobe is teaching him to be a man

I would hope that Dwight Howard is starting to figure things out, but because he talks so much and contradict himself so often, you have to wonder.

Dwight spoke to the media again and said that it took him half the season, but he understands now what Kobe was saying about keeping the clown act in Orlando.

“It’s going to make me a better man and a better player from watching Kobe,” Howard said.

“Besides just the expectations,” he said. “In games, I mess up and there’s somebody in the crowd saying something and I’m ready to snap at ‘em. That’s not what we’re supposed to do.

“But you look at a guy like Kobe and he doesn’t care about nothing but going out there and playing hard. That’s a lesson a lot of us have to learn — especially young guys.”

“I told him [Bryant]: ‘I’m afraid to miss. When I get out there, I don’t want to miss, and I end up missing.’ And he was like: ‘You know what? Shoot 1,000 jumpshots a day. You’re going to miss a lot of those shots. But that’s OK. Because you’re teaching yourself it’s OK to miss.’

“Now I see it. He gets out there and he might miss a couple 3s, but then he’ll make nine in a row. You see that and it just kind of gives you more inspiration.”

Dwight Howard is a grown man with 5 Baby Mamas, he shouldn’t need Kobe to teach him to be a better man, but maybe he needed to see someone who takes his profession seriously to wake up and realize he isn’t a child anymore.

It might be too little, too late for the Lakers, but they are making a push currently for the playoffs. Dwight Howard is going to have to stop clowning and start balling for them to make it.

1. Memphis Grizzlies (4) – Memphis is playing the best basketball in the league right now. They have beaten the Heat, the Thunder, and the Knicks so far this early season. Gay, Gasol, and Randolph are all playing well, this team really looks like a contender.

2. San Antonio Spurs (2) – The Spurs are just a sold basketball team. I would not be surprised if they ended up with the best record in the league this year. They have 12 players who are getting 10 minutes or more. That is rare to see in the NBA, I believe this is going to help them down the stretch.

3. L.A. Clippers (3) – Lob City is for real. This team will be very good at the end of the season. They have beaten all the good teams, Miami, Lakers, Spurs, and Memphis. Most of their games have been at home, they have a tough 4 game road trip this week. We will see how well Lob City can travel.

1. Miami Heat (1) – After I watched them play Boston the first game of the year, I thought that they were unbeatable. Against Boston they got 29 points from D-Wade, 26pts and 10 rebounds from Lebron, 19pts and 10reb from Bosh, and 19 points off the bench from Ray Allen. If they can continue to get this production, they might break the record for wins in a season.

2. Chicago Bulls (2) – The Bulls haven’t showed me anything to lower themselves in the Power Rankings. They are getting good production from their starters, everybody but Kirk Hinrich is averaging over 11. Noah is averaging nearly 15pts, and 9 rebounds. Once Derrick Rose comes back they could win the east.

3. Indiana Pacers (3) – All of their starters are averaging over 10 pts. They are also getting 10 pts off the bench from Lance Stephenson and Tyler Hansbrough. If they can continue to get this kind of production they will be just fine. They will be dangerous by the endo of the season.

Damian Lillard will not be pushed around

The buzz around Lillard grew throughout the summer, into camp and more during the preseason. Then, in a season-opening win over the LA Lakers, it boiled over even more. It’s for good reason – the No. 6 overall pick scored 23 points and had 11 assists in his professional debut. That’s great.

But that wasn’t his biggest contribution. He came through the biggest on what was probably his worst decision of the night. And it was a missed shot.

It came early in the game when the 6-3, 195-pound Lillard tried to dunk over the hulking 6-11, 265-pound Dwight Howard. Lillard got stuffed, fell to the ground and the ball went out of bounds.

This play, this one unspectacular offensive play, proved to everyone in Portland that Damian Lillard is here to play ball and he is not backing down from anyone. He saw an opportunity and he tried to seize it. Sure, the smarter play is to float the ball over Howard. But it was the rookie’s first game and he wanted to make a statement – he wanted Howard on a poster. END_OF_DOCUMENT_TOKEN_TO_BE_REPLACED

The Rockets should’ve, could’ve and would’ve on Draft Day

If you watched the NBA Draft on Thursday night, odds were you had to wake yourself up on a few different occasions.

There were no mega deals, veterans to new teams or huge surprises. It was just a basic, boring draft. Every year the NBA Draft usually has some sort of spunk, but 2012’s was a snoozer. And one team was especially quiet despite doing everything imaginable to make some noise prior to the draft.

Call me crazy, but weren’t the Houston Rockets supposed to turn themselves into the fantastic franchise they once were in the days of Hakeem Olajuwon? It seemed during the days approaching the draft the Rockets were geared up to do so and had the appropriate arsenal to rebuild in just one offseason. So what happened? Here’s a list of Houston’s mistakes during the NBA Draft and in the short-lived offseason, so far.

• Missing out on Howard 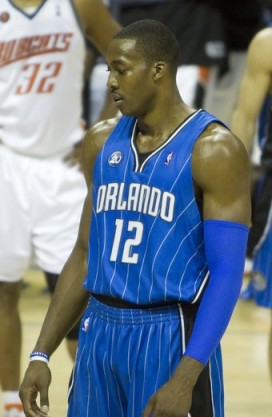 Despite their best efforts, the Houston Rockets couldn’t obtain Dwight Howard during the NBA Draft. Photo by: Kenyaboy7 / Flickr

I thought the reason the Rockets made trades for all of these picks was to obtain Dwight Howard. And hell, they probably could’ve had Superman. The only problem was that D12 doesn’t want to play for Houston, which probably spoiled a lot of the team’s plans for this season’s draft.

What boggles my mind is why Howard doesn’t want to play for the Rockets. This is a franchise that once was one of the greatest teams in the NBA and has tried just about everything to regain that image for the past two seasons. Houston can’t, however, because marquee players don’t want to play there for some reason. It seems to me that Houston is a basketball town. The days of Hakeen, Clyde the Glide and Charles Barkey are over, but lately the front office has made valiant efforts to land superstars — more than one.

Last season, the Rockets tried to obtain Pau Gasol and the trade fell through, mainly because NBA commisioner David Stern didn’t want Chris Paul to join the Lakers. So what how did the Rockets respond? They finished out the shortened 2012 campaign, missing the playoffs and decided to aim high, really high this offseason. END_OF_DOCUMENT_TOKEN_TO_BE_REPLACED 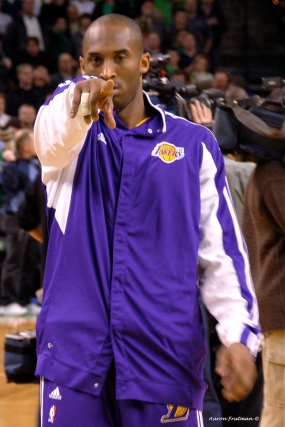 With the NBA regular season winding down, some hardcore fans may already be pondering about who will win this year’s MVP award.

Certainly, there is a handful of superstars deserving of the honor, but the award is about more than just leading the league in scoring, rebounds or assists. An MVP has to truly be a leader, who would change the whole dynamic of their team if they were absent from the starting lineup. Think about when Michael Jordan retired from the NBA to pursue a baseball career. The following season, Scottie Pippen definitely didn’t get any MVP love and the Chicago Bulls simply weren’t the same.

So when I look at this year’s field of possible deserving candidates (in terms of what they do for their teams) for the 2011-2012 MVP award, there is really only three players — Kobe Bryant, Dwight Howard and Kevin Love — who fit that profile. The only problem is, Love’s Timberwolves have already been eliminated from playoff contention, so don’t expect him to even sniff at the trophy until Minnesota is better. And Dwight Howard’s absence from the Orlando Magic because of back spasms has only proven that he is the heart and soul of that team after Orlando slowly slipped further and further down the Eastern Conference standings once Howard started to miss more and more time.

So that leaves Kobe. Will he run away with the MVP award? Maybe not. After all, right behind him are superstars Kevin Durant and LeBron James, who rank No. 2 and No. 3 in the league, respectively, for points per game. But how much would Durant’s Thunder and James’ Heat be suffering if they weren’t there? Miami certainly could hold its own with Dwayne Wade and Chris Bosh running the show and you have to believe Oklahoma City could do the same with its depth.  END_OF_DOCUMENT_TOKEN_TO_BE_REPLACED