Don’t count out San Antonio in the NBA playoffs 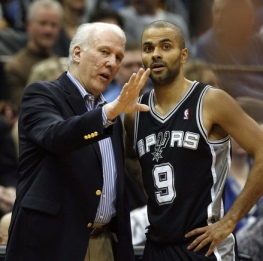 The NBA Playoffs are quickly approaching with just a week and a half remaining in the regular season. To think it wasn’t too long ago that NBA enthusiasts like myself were in doubt that there would even be a season.

Now everyone knows that the East is a two-team race (maybe three if you consider the resurgent Celtics a legit contender) with the Bulls and the Heat. If you’re a regular Couch Side reader or one of the few Twitter followers I have, you know which side I’m on.

As for the West, well everyone since the beginning of the season has assumed that Oklahoma City was destined to meet either Chi-Town or South Beach in the NBA Finals. Everyone assumed that the old guards, namely the Spurs and the aforementioned Celtics, didn’t stand a chance in the compressed, lockout-induced season.

But here they are, Greg Popovich’s boys in the silver and black just as they always are. With a week and a half remaining, the Spurs are just a game behind OKC for the top-seed in the West. The old guys are here and they’ve got the young, athletic Thunder in sight. END_OF_DOCUMENT_TOKEN_TO_BE_REPLACED