In this week’s episode, special guest Andy Paul joins the show to discuss how the Giants will follow up their Super Bowl win and how the Patriots will look to rebound after the big loss. Also in the “Halfcourt Shot,” the gang debates if Kevin Love is a top five NBA player and the impact of Chauncey Billups’ season ending injury. And finally, Couch Side takes its first look at the NFL Draft in a special edition of Quick Snippets. Click Below to listen to Couch Side!

Free agent power forward Kenyon Martin has agreed to terms on a deal with the Los Angeles Clippers.  Martin had been playing for the Xinjiang Guanghui Flying Tigers in China, but reached a buyout in his contract back in December.  The deal is worth $2.5 million.

I like this deal for a couple of reasons.  The first is that K-Mart can still play.  He has always been solid defensively and while his offense isn’t his strong point, he is a good rebounder and can get hot from night to night.  Martin, 34, averaged 8 points and 6 rebounds with the Denver Nuggets last year before heading to China during the NBA lockout.  Martin also provides valuable depth for the Clippers.  Facing six game road trips twice in the next six weeks, Martin will provide much needed rest for Blake Griffin and DeAndre Jordan.

The downside to Martin is the risk of injury.  He seems to have perpetual knee problems and hasn’t played in over 70 games since the ’07-’08 season.  And since that season his games played have dropped steadily each year due to injury.  Last season he played in only 48 games and averaged just 25.7 minutes per game, the lowest of his career.

The Clippers are off to a 13-7 start and hold a one game ahead of the Lakers in the Pacific Division. 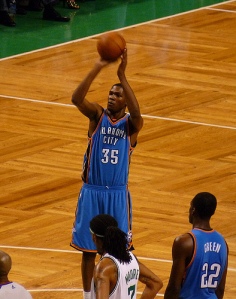 Kevin Durant and the Oklahoma City Thunder may just win the NBA finals with a shortened season. Photo By: Lorianne DiSabato / Flickr

With the NBA season ready to to tip off Sunday, it’s time to actually start thinking about basketball again.

The season, which was cut short due to labor disagreements, will jam pack 66 games into 124 games and test every single team more so than the regular 82-game campaigns. It may be hectic on the professional hardwood this season, but hoops fans should be excited about the shortened schedule because it’s sure to provide a playing field that is more equal.

Young teams that can come out of the gates blazing could end up winning the title this season with the advatages of young legs. Teams with larger cores of veterans may struggle because breaks will be short, off days will be erased and fatigue will hit harder than ever before.

This season should be one to remember. And there should be a plenty of curve balls thrown at the fans. But do not fear, Couchsideshow.com is here to prepare you for what should be a season full of surprises.  We don’t have quite the resources to preview all 32 teams, but here’s a look at the top sixsquads and how each one could win the NBA Finals crown in 2012: