Designated hitter isn’t an easy position to play, even though in theory you’d think it would be. You can relax during the fielding portion of the game, and wait your turn to hit.

Historically this hasn’t been proven true. DH requires an adjustment that most everyday players will struggle to adapt, as it requires a different routine both mentally and physically. Some guys are cut out for it, some aren’t. And now, with the position being used to utilize platoon matchups, there are very few full time DHs. Thankfully there are enough to put together a top five list, so enjoy.

The rookie slugger was dealt this offseason from the Yankees to the Mariners for young flamethrower Michael Pineda, a rare trade of raw talent for raw talent. All the reports over the last several years indicated that Montero didn’t have what it took to be a full-time catcher, and was projected as a DH going forward. He moves from a friendly hitting park in the Bronx to the spacious and cavernous Safeco Field. Montero has power to all fields and most importantly, the opposite field as a right handed batter.  The projection system ZiPS says that Montero will hit .257/.322/.438 with 21 home runs and 68 RBI. Consider the fact that Montero will be facing tough competition in Los Angeles and Texas, having to hit the majority of his games in a tough park, and the fact that the Mariners have ranked last in runs scored in the AL the past three seasons. Either way, Montero should far appropriately in his first go around, maybe not Eric Hosmer good, but still good. 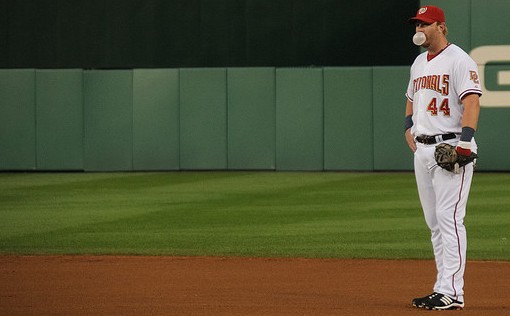 Yes, we know that Dunn had one of the worst seasons in recent memory (any way you slice it; a .159 batting average is wretched.) Dunn has been pretty easy to project throughout his career; he strikes out at a high rate, walks at a high rate, and hits around 40 homers per season. Take the good with the bad and he’s been a reliable run producer for the first 10 years of his career with the Reds and Nationals. A move to the White Sox and a permanent DH position didn’t aide his usual stats, but a lack of adjustment in all phases of his game produced a pathetic 11 home runs in nearly 500 plate appearances. What’s even stranger is that he had 75 walks to 66 hits! I wonder how often that happens. Is there hope on the horizon for Mr. Dunn? We believe so, as these types of drastic regressions hardly ever happen, so you’d think and hope it was an exaggerated fluke season.  If the law of averages equal out, Dunn should return to a semblance of his former self. END_OF_DOCUMENT_TOKEN_TO_BE_REPLACED

For part seven of Couch Side’s 12 part series on the best baseball players by position for 2012, I’m going the be showing a lot of love for the National League’s top left fielders. This list was an easy pick before I remembered that Ryan Braun’s suspension had been lifted. So although I don’t agree with his actions, until the man is proven guilty, he’ll lead off Couch Side’s list of the best in L.F.

Like it or not, Ryan Braun was the N.L. MVP last season. And hate it or love it, he will be playing this season despite some faulty handling of his drug test. With that out of the way, let’s focus on how this guy plays. Braun almost won the Triple Crown last season, falling just short in each category by the slimmest of margins. By hitting for power and contact last year, Braun proved that he may just be the best hitter in baseball. And it’s hard not to call a guy who hit 33 bombs, 111 RBIs and carried a .332 batting average just that. You never saw guys like Barry Bonds or Mark McGwire hit for average. That’s why it’s hard for me not to love Ryan Braun just a little. He may have cheated, but at least he didn’t gun for the single season home run record. Instead, he was Mr. Baseball last season. And if he is completely innocent, I feel like he could be one of the best of all time. After all, the guy is an extremely talented outfielder, feared hitter and a threat on the base paths with 33 swipes last season.

If Hamilton can avoid injury and any sort of bad press by “relapsing,” he may just have a breakout season this year. It’s a stretch to say a former MVP is still capable of a breakout season, but Hamilton is due after missing solid stretches of time during the past two summers. We all know he is capable of 30 or even 40 home runs and is a lock to secure 100 RBIs. With a full season, he may just throw his name back into the MVP hat and Hamilton will certainly be looking to improve his numbers, considering this is the final year of his contract.