Have Opponents Figured Out the Houston Texans? 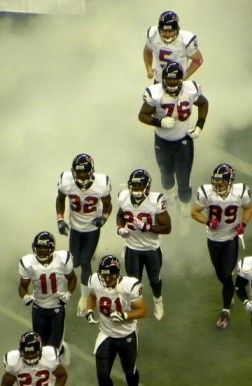 With a couple of lackluster wins during the past two weeks, some NFL teams seam to have figured out the one-loss Houston Texans. Photo by: Brit / Flickr

The Houston Texans currently hold the AFC’s best record at 10-1, also tied for the top record in the NFL. However, as the Texans continue to pile up wins, their opponents continue to bring their “A” game in hopes of playing spoiler and knocking off a legit Super Bowl contender. The past two weeks, the Texans have put together a pair of thrilling, hard fought, close overtime victories, but against poor competition in the Jacksonville Jaguars and the Detroit Lions. This begs the question, are the Texans simply going through a bit of a midseason slump, or have opponents figured out the formula to defeat them?

The answer to this question might be a little bit of both. Coming down the home stretch of the regular season, the Texans are virtually a lock to simply make the playoffs (were one Dolphins loss away from actually clinching Sunday), the AFC South divisional crown seems in hand baring a complete late season collapse, and the Texans are still in great position to take the AFC’s top seed with a one game lead over the second place Baltimore Ravens and tiebreakers with those Ravens and AFC West division leading Denver Broncos.

It would appear the Texans have a little room to slump, maybe due to a lack of motivation. The NFL season is long and the Texans, like most other teams, are pretty banged up. It’s understandable if the Texans didn’t mentally prepare for the Jags or Lions the same way they might for the Ravens or Broncos, especially considering their aforementioned lead in the standings. If this was definitively the case, then there wouldn’t be much worry because fans have seen the Texans turn it on and win almost every big game they’ve played in this season (minus their one loss of course). The game in two weeks against the New England Patriots will confirm or deny the claim that the Texans are simply playing down to their competition due to a lack of motivation. END_OF_DOCUMENT_TOKEN_TO_BE_REPLACED

In this week’s episode, the gang recaps the NFL Wildcard round playoff game and looks ahead to the divisional games. The hosts also discuss the BCS national championship. Also, in quick snippets, Craig and Wade chat about Hue Jackson, Paul Westphal, the Washington Wizzards, Prince Fielder and Peyton Manning. Click below to listen to the Couch Side Podcast

Listen to Couch Side

Everyone knows a lot of headlines surround the infamous NFL playoffs.

It’s up to us fans to sort through them to come up with which one is the most intriguing. Now, it would be easy to go with Tim Tebow and the Denver Broncos or the matchup between the Houston Texans and the Cincinnati Bengals, which features to rookie quarterback going head-to-head. Those are simple, good topics, heading into wildcard weekend. And I like simple. I like easy. So I’ll be breaking down what I believe to be the most intriguing headline for the wild card round: The new faces in the playoffs. It’s the Houston Texans and the Detroit Lions, which oddly enough both play on Saturday. Looks like I had better get started:

Ndamukong Suh and the Detroit Lions will make their first playoff appearance in more than a decade Saturday against the New Orleans Saints. Photo by Jeffrey Beall/Flickr

• Opponent: They’re at New Orleans to clash with the Saints at 8 p.m. EST

• Chances: Although the Detroit Lions have made the postseason before (15 times), the squad hasn’t played when it matters most since 1999. One could argue that the lack of experience will hurt Detroit when the Lions suit up for the Saints. But this Detroit team is different from those in the past. There is just a whole new swagger to the squad. I’m not going ot get fancy with the statistics here, but the Lions are what NFL teams are currently aspring to be. With young, athletic talent like Matthew Stafford, Calvin Johnson, Ndamukong Suh, Nick Fairley, DeAndre Levy and Titus Young there’s no telling what this team could do in the future. And Detroit may just start making its name for the years to come this weekend. A lot of people expect the Lions’ matchup with the Saints to be an offensive battle and it should be nothing short of that. I don’t see Detroit coming out on top, though, because New Orleans is my Super Bowl pick, but it should be the most exciting game Saturday. The Lions could sneak by, however, because of the Saints aging secondary players and because the Seattle Seahawks took down New Orleans last year in the first round.

END_OF_DOCUMENT_TOKEN_TO_BE_REPLACED

In this week’s episode of Couch Side, Co-Host Craig Paul makes his debut, joining Couchsideshow.com editor Wade McMillin in a NFL playoff preview. The pair breaks down each weekend wildcard matchup in the NFC and AFC and also examines the top seeds in both conferences. Keep listening and also see Couch Side’s take on quick NFL headlines that include the firing of Rams coach Steve Spagnuolo, Bills defensive guru Dave Wannstedt’s promottion and Rex Ryan’s tears. You won’t want to miss this episode of Couch Side!

Also, don’t forget to send us questions, thoughts, comments or if you’re interested in becomming a part of the Couch Side team to our mailbag tab on our homepage. We’ll then take questions and answer them in next week’s podcast. So tune in every Tuesday for a new episode of Couch Side. Click on the link below to listen to this week’s episode: