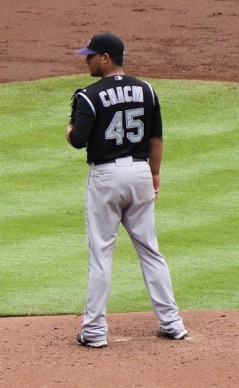 There’s no hiding the fact that Coors Field isn’t a pitcher-friendly park.

While that may mean good things for hitters in the Colorado Rockies’ lineup, it spells disaster for their pitching staff. In years past, Colorado has tried to combat their home field by adding big names, but lately, it seems like the team has given up on trying to land talented free agents. During the Rockies World Series run in 2007, Colorado had the likes of Ubaldo Jimenez and Aaron Cook as their top of the rotation starters. Now, just six years later, it seems like there really isn’t a clear Ace of this staff or even a legitimate No. 2 or No. 3 starter.

In fact, not much has changed when comparing last year’s starting rotation to this season’s. The only real difference is that last year there were a few names — like Jamie Moyer and Jeremy Guthrie — that fans could get excited about. In 2013, the only guy fans can have high hopes for is Jorge De La Rosa, who hasn’t pitched in 16 months.

• Long shot in the dark: The chances De La Rosa bounces back from Tommy John surgery are slim. The fact is most pitchers never successfully return from the hurler’s curse. Colorado fans will have their fingers crossed that De La Rosa can somehow defy the odds, but even if he does, they won’t want to see the short-lived 2013 version of the 31-year-old. Last season in just three starts, De La Rosa posted an embarrassing 9.28 ERA and an 0-2 record with just six strikeouts.   De La Rosa’s history before that isn’t anything to brag about, either. The lefty has only had one season with a sub-4.00 ERA, which came in 2011 when he only started 10 games. To call him this year’s Ace should be more of a concern than a hope of an incredible MLB comeback story.  END_OF_DOCUMENT_TOKEN_TO_BE_REPLACED

Rockies went all in this offseason

I can’t believe I’m saying this, but the Colorado Rockies were the most active team this offseason in all of Major League Baseball.

It takes me back to the winter of 2000 when Colorado dished out big bucks for some big busts in Denny Neagle and Mike Hampton. Now, we all know how that turned out, but this season and a few years down the road, the Rockies should only reap the benefits of what their front office accomplished during the past few months.

Colorado got much more experienced, cleaned house and held onto most of their top prospects all in one very busy offseason. Rockies General Manager Dan O’Dowd went nuts this season, hoping that quantity will outweigh quality. Colorado didn’t go for big names like Prince Fielder or Albert Pujols like they did in 2000 to bolster one of the weakest starting rotations in all of baseball. Instead, the Rockies made 10 trades, signed three free agents, resigned five of their own free agents and dumped seven guys from last year’s team — five of whom signed minor league deals with other teams.

Wow. What an offseason. And one the fans should be proud of. They just might have a tough time trying to guess who will be where when opening day hits Coors Field. In the end, however, the plethora of transactions may pay off with a return to the playoffs.

Here’s a breakdown of what the Rockies were up to this offseason by transaction type: