In part two of Couch Side’s 12 part series on the best position player going into 2012, I’ll examine the MLB’s top backstops. A couple of catchers on my top five missed a big chunk of the 2011 season because of injury, but they’re both still considered two of the best in the game.

Here’s a closer look at the best from behind the dish in 2012: 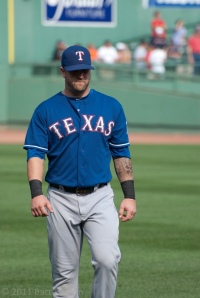 It’s weird to think a 30-year-old wouldn’t reach his prime until his career was almost halfway over, but it appears that’s the exact case for Mike Napoli. The six-year veteran set career highs in home runs, RBIs and batting average last season for the Texas Rangers and he played a key factor to their American League Championship run. The most impressive of Napoli’s personal highs last year had to have been how he hit for average. Don’t get me wrong, his power numbers were very impressive, but before last season, Napoli never hit higher that .273. In 2011, the Florida native hit an amazing .320. I don’t think we’ve seen the best of Napoli yet and that’s saying a lot. It will be tough for him to make a repeat performance after an incredible 2011 season, but now that the Rangers are contenders, he’ll play with that bad taste of losing a World Series lingering in his mouth.