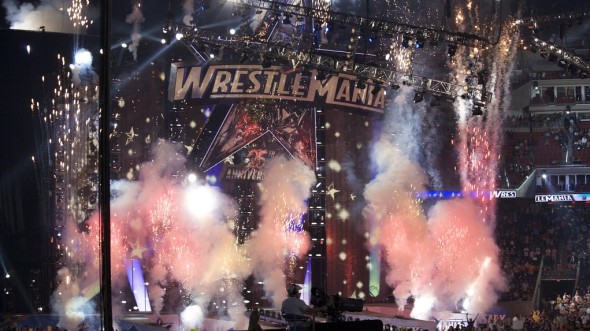 Wrestle Mania 29 has a lineup that should have WWE fans on the edge of their seats. Photo by: Ed Schipul / Flickr

There’s an inherent feeling about the 29th edition of WrestleMania — that it is predictable. And, after looking at the card, a fan could probably easily deduce many of the outcomes.

You see, despite all of its glory, history, pageantry, etc., this year’s ‘Mania lacks a certain luster, notoriety, and even buzz. Maybe it’s the lack of a solid build (courtesy of the creative team’s indecisiveness), the fact that it’s going to be hard to top last year’s spectacle, or maybe it’s because of this…

Rematches. Rematches galore. Rematches that make the official line-up look a big bag of “we saw that coming.”

Even as a wrestling fan, I’m finding it hard to remember that The Granddaddy of Them All is taking place this Sunday, emanating from MetLife Stadium in New Jersey/New York. For all the reasons listed above, I’m not as excited as I have been in years past, which might be why I scheduled a golf outing with some friends for that afternoon and why I’m also more amped for the Season 6 premiere of Mad Men that night.

Nevertheless, it is still WrestleMania and a lot of the time, the WWE does its best work when they have their backs against the wall to put on a good show, and this feels like one of those times. So, without further ado and rambling, let us dive into the night’s matches…

This is actually kind of a rematch as well, as these two have battled quite frequently on episodes of RAW and SmackDown and have had numerous encounters, leading to the feud. Barrett has held the title since December, and has succeeded in every title defense. He is one of the future stars of the company, and deserves the push he has been getting. However, The Miz hasn’t had a good win in a while and has started to take on some of the characteristics of his kind-of-now-mentor, the “Nature Boy” Ric Flair, including having Flair bestowing his legendary submission move, The Figure-Four Leg Lock. This could actually be a solid opening match to get the crowd started and start the night off right, even if it is just on the preshow.

Stuck In A Rut: WWE has No Way Out (with results)

The WWE’s pay-per-view event “No Way Out” didn’t have too many surprises or upsets. Photo by: The Badder in the World / Flickr

No Way Out. Three words that when grouped together create an idea of fear, panic and the unknown. That is what the WWE is aiming for this Sunday when the company puts on the pay-per-view live from the IZOD Center in East Rutherford, N.J. However, only two of the matches on the card create that sense of paranoia and helplessness, and even then, it is a risk even calling them big time main events. WWE’s last PPV, Over the Limit, was pretty good but the transition to this month’s show has been sloppy, unorganized and for lack of a better word, facepalm-esque. Ok, so that’s not a word. Sue us.

So, after failing to ingratiate you with our presence with Over the Limit predictions, we are back to hit you with some in-depth knowledge and full-scale awesomeness. So sit back and enjoy while we tell you what we think will happen this Sunday in a world dominated by a fake reality, guys in tights and Speedos, and terrible announcing.

This blog wasn’t able to be uploaded before the event on Sunday night. In addition to Brett’s and Matt’s predictions, Couch Side has also provided the results in the headline of each match.

Brett: Thank goodness that this match will be the pre-show display, because I have no interest in witnessing a dancing fat guy facing off against a muscular version of Carlton Banks. Ever since returning as a guy who was infected with disco fever, Brodus Clay has been squashing jobbers left and right and has never really been given any true direction with his character. The closest he came was a couple of weeks ago when he challenged Big Show, but nothing came of that. He was entertaining when he came back after having a reputation as a monster heel, but has become stale since. Otunga has developed a nice role as the coffee-sipping right-hand man to General Manager John Laurinaitis. His gimmick has drawn comparisons to that of former WWE superstar Chris Masters, due to his physique and entrance displays. As far as the match itself, I’m going to go with Clay due to the fact that the crowd will enjoy it and hopefully set the tone for a night that on paper, seems destined to be very underwhelming.

Pushing the Envelope: WWE gets Extreme

After Wrestlemania, it’s hard to imagine the WWE topping itself.  After all, this year saw four hours of grappling headlined by John Cena versus “The Most Electrifying Man in Sports Entertainment,” The Rock.  It was The Rock’s first match in eight years, which garnered much hype.  But let’s be honest for a second; the event, though an instant classic, failed to live up to the buildup (and our predictions).

How do you beat a PPV headlining the returning Rock?  Well, the WWE is hoping another man returning after an eight-year absence can bring a spark in former WWE and UFC Champion Brock Lesnar.  Though he left the company on bad terms, Lesnar has returned and set his sights on Cena, who once again finds himself the underdog at Extreme Rules, set to air this Sunday, April 29.  Read on for insight from two still-closeted wrestling fans and their picks for the one night a year where the WWE goes Extreme:

Matt: No one thought Santino Marella would be the dominating champ he has been since dethroning Jack Swagger a little over a month ago, myself included.  Known more for his comedic relief than his actual in-ring ability, it’s hard to take Marella seriously, especially when he’s a champion.  Still, the guy can entertain a crowd like very few can, and it’s been interesting seeing him dominating top-tier talent that he was losing to a few months ago.  The Miz, on the other hand, has been buried for the past year since his championship loss to the aforementioned Cena.  That is until this past Wrestlemania, where he pinned Zack Ryder and secured the win for Johnny Ace’s team.  So what does The Miz get for his hard work?  Why a championship match against Teddy Long’s former right-hand-man in Marella.  I can see this match going both ways, but I just have a feeling The Miz is going to come out and ride the hot hand he’s been seeing since his Wrestlemania victory.

Brett: Santino Marella is arguably the most “over” wrestler in the WWE today. A goofy gimmick that appeals to a younger audience, he has found a way to generate interest from the older demographic as well. He won the belt in March and has held onto it ever since despite challenges that seemed to put him at a disadvantage. The Miz, on the other hand, has been stale as can be. The once-WWE Champion has been in a downward spiral in terms of being pushed and appearing on television. He has gotten some heat backstage for his antics and personality, thus leading some to believe that his downward trend is because of this. This match will be the “dark” match of the night, meaning it will not be on the pay-per-view broadcast but will be able to viewed online on YouTube. It appears that the WWE is serious about giving Santino some of the spotlight as evidenced by his recent opportunities at the Elimination Chamber pay-per-view and his captainship of Team Teddy at WrestleMania 28. The Miz has been buried hardcore, minus a few chances and the future does not look too bright for this once high-profile star.

END_OF_DOCUMENT_TOKEN_TO_BE_REPLACED

Men (and women) in Tights: A Rundown of WrestleMania 28

Although it remains a sort of cultural taboo, no one can deny the buildup to WrestleMania.

And while it’s not on par with the Super Bowl or any other championship game (or series), WrestleMania one-ups its opponents with sheer star powers. For example, people may not know what the Royal Rumble is, but they’ve definitely heard names like “Stone Cold” Steve Austin, Hulk Hogan, and even Dwayne “The Rock” Johnson.

It’s only fitting then that The Rock is making his in-ring return to pro-wrestling this Sunday, April 1st for WrestleMania 28, emanating from Miami, Florida. The event is being dubbed as the biggest and best wrestling pay-per-view in history, so read on for a list of WrestleMania 28 predictions from Matthew Vinsko and Brett Murdock, two (sort of ashamed) wrestling fans:

• Matt: Now I’m not saying this Divas match is going to open the show, but I figure we should get rid of it early in our predictions. Maria Menounos, host of TV’s Extra, is stepping in the ring for her first real match while teaming up with former Divas Champ, Kelly Kelly. Beth Phoenix has been on a roll lately, and Eve Torres’ recent heel (bad guy) turn makes this match more compelling than it should be, but considering Snooki competed, and won, at last year’s event, it’s hard to imagine the WWE bringing in a celebrity only to have them lose. Phoenix and Torres deserve better than this, but I doubt they’ll get it on “The Grandest Stage of them All.” Expect retribution come Monday Night Raw after a humiliating loss to a Diva with two first names and a current Dancing with the Stars competitor.

• Brett: It’s unfortunate that the WWE is resorting to having the host of Extra step into the squared-circle, especially when it is going to overshadow the Divas champ in Phoenix. This is a fairly easy match to predict because at WrestleMania, celebrities will ALWAYS go over — just look at Snooki‘s appearance at last year‘s event. This will not be a technically-savvy match as those days are long gone with the current Divas division being more about looks and glamour than actual grappling. This match should occur in the middle of the event, so it is an opportunity to relieve your systems more than anything else. My hope is here is that after the match, Kharma — the new dominating force in the Divas division — comes out and destroys them all.