Couch Side’s usual trio of Wade McMillin Craig, Paul and Sean Schoonover take on sports topics including, the AFC and NFC Championship,  the best All-Star festivities in sports and MLK Day in this week’s show. Click below to start streaming, downloading or subscribing to the Couch Side Podcast:

•  Click here to stream the Couch Side Podcast Episode 43: All-Star Roundtable, via our host site, TalkShoe

Couch Side Statistics: 2012 in review

The WordPress.com stats helper monkeys prepared a 2012 annual report for this blog.

1. Oklahoma City Thunder (2) – The Thunder continue to improve. Kevin Martin is basically giving the Thunder what James Harden did. I think their biggest weakness is their rebounding; Durant shouldn’t be their leading rebounder. They are hot, winning their last 8 games.

2. San Antonio Spurs (3) – San Antonio has won their last four games with a solid win against Memphis. They also have the best road record in the NBA with 10 wins already; the next best team on the road has seven wins.

3. Memphis Grizzlies (1) – The Grizzlies have lost two out of their last four games. They lost to San Antonio and Atlanta. Zack Randolph is ballin out of control, he could be in the MVP talk at the end of the year.

1. New York Knicks (1) – New York is for real, they were able to beat the Heat by 20 points without Melo. I only have one concern for the Knicks — they shoot a lot of three’s. They were the first team in the history of the league to attempt 40 three-pointers in 2 consecutive games. At some point, I think this could hurt them somewhere along the way.

2. Miami Heat (2) – Miami still sits at No 2 because of their loss to the Knicks. I still think that Miami is going to win the East, but they are getting everybody’s A game simply because they are the Champs. On a side note, D-Wade is starting to look old.

3. Atlanta Hawks (4) – Hotlanta is 9-1 their last 10 games. They have won three games in a row, and they sit half a game behind Miami in the Southeast Division. They will be a tough match up for anybody in the playoffs. 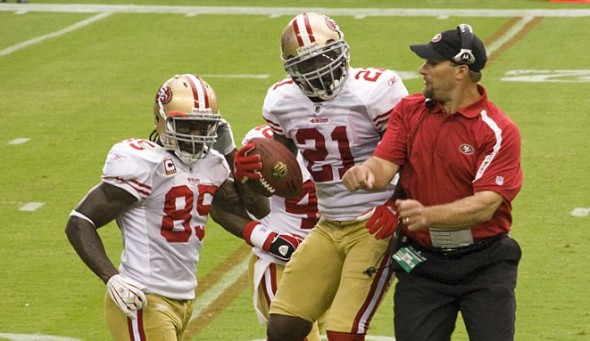 The San Francisco 49ers were a team to watch in the opening week of the 2012 NFL season as they took down the Green Bay Packers on Sunday afternoon. Photo by: Michael Wifall / Flickr

A minor cold can’t even keep Couch Side host Wade McMillin away as he put down his box of Kleenex and joined co-host Craig Paul for yet another football heavy show. In this week’s episode, the gang introduces a new segment, The Monday Night Maestros, where they discuss the two biggest headlines from Week One of the NFL season (Robert Griffin III and the impressive play by the San Francisco 49ers) before previewing some of the top matchups (Chicago vs. Green Bay, Washington vs. St. Louis and Denver vs. Atlanta) for Week Two. In the Big Picture the duo discuss who offers the best sports website, debating between ESPN and Yahoo! And finally in the Head-to-Head Honchos, Craig and Wade serve up some Fantasy Football advice that includes Week One waiver pickups and bench positions.  Click below to start streaming, downloading or subscribing to the Couch Side podcast (recorded Sept. 3, 2012).

A look at the career of recently retired RB Clinton Portis

Former Denver Broncos and Washington Redskins running back Clinton Portis officially hung up his cleats this week after nine seasons in the NFL. In just a few seasons with the Redskins Portis landed as the franchise’s second all-time leading rusher. Photo by: DrivingtheNortheast / Flickr

Yesterday afternoon Clinton Portis officially retired from the National FootballLeague.  Since Portis had been of the league for over a year his retirement was of no surprise to anyone yet it was still a somber occasion.

When it was announced on Wednesday that Portis would be announcing his retirement at Redskins Park I felt that there should be a cause for celebration. Sure Portis had his faults but for the past twenty years of losing and mediocrity no other player in burgundy and gold had thumped his chest more with pride in being a Washington Redskin.

Of course if you were listening to former Redskin linebacker LaVar Arrington on his afternoon talk radio show you would have thought Portis to be a bum. LaVar and his sheeple callers seem to rag on Portis and if anyone praised the man LaVar would offer up some conjecture. It’s no secret that LaVar doesn’t like Portis (and vice versa) but there are times when you have to put personnel feelings aside and give a man his due.

I had not realized that a lot of fans felt this way about Portis. Sure this shtick would get annoying from time to time. His multiple personalties or his YouTube videos him and tightend Chris Cooley would make, but Portis was just having some fun while playing a game we all watch for entertainment.

Portis ran for 6,824 yards with 46 touchdowns as a Redskins and is only second to the immortal John Riggins in franchise history. There are so many running back in Redskins history that we look back on with fondness and only Riggo can say he was better than Portis. And even with Riggins’ size he still wasn’t half the blocker Portis was. In an era where most running backs consider a block to be just shoving a blitzing linebacker, Portis summoned his inner Russ Grimm and would drill anyone who came his way. END_OF_DOCUMENT_TOKEN_TO_BE_REPLACED

Quarterback Christian Ponder is entering his second season in the NFL for the Minnesota Vikings. Ponder had a sub-par year last season as he played in 11 games throwing 13 touchdowns and 13 picks. However, this year, Ponder is coming in with lofty goals for himself.

Earlier in training camp, Ponder mentioned to the media that it was his goal and the Vikings goal to score every time they had possession.  What has he done so far this preseason?  He has put the Vikings in position to score every time he has been in as they have scored four out of the five times he has been in.  The only time they did not score was when rookie Blair Walsh missed a field goal.  How about that for living up to a goal?

While this will obviously not keep up for the rest of the year, and it is a small sample size, it is a great start.  However, Ponder made another statement.  According to a blog by Mike Wobschall and NFL.com, Ponder said, “We want 75 percent completions on first and second downs.  That’s the number we’re shooing for.  Obviously, we were in a lot of third-and-long situations a year ago, and we want to get out of that.”  This obviously is a lofty, lofty goal. END_OF_DOCUMENT_TOKEN_TO_BE_REPLACED