The Edmonton Oilers haven’t lived up to expectations on the ice the past few NHL seasons even though they’ve had the first overall draft pick the last two years. The Oilers will now get a chance to improve their team once again this summer as they will once again draft first overall due to winning the NHL’s draft lottery on Apr. 10.

The Columbus Blue Jackets finished the current regular season in 30th and last place in the league and had a 48 per cent chance to hang onto the number one pick overall.  However, the oilers, who finished in 29th place, had an 18.8 per cent chance at winning the lottery and hit the jackpot with it. Oilers’ general manager Steve Tambellini was obviously happy with his team’s stroke of luck and will be able to add another excellent top prospect to his roster or trade the pick for an established NHL player or two.

The Oilers already have some of the best players in the league, such as Taylor Hall and Ryan Nugent-Hopkins thanks to the last two drafts as well as youngsters Sam Gagner and Jordan Eberle. Tambellini said if you’re in the draft lottery and have to travel to Toronto you might as well win it. He added that the franchise and its fans are really excited about the outcome and the chance of adding another young star to the squad.

END_OF_DOCUMENT_TOKEN_TO_BE_REPLACED 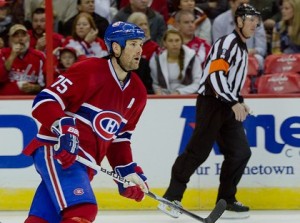 The Montreal Canadiens traded defenseman Hal Gill after two and a half seasons with the team. Photo by: Bridget DS / Flickr

Although there was some interesting trades brought about in the NHL over the last week, this year’s trade deadline seemed to disappoint me. A lot of teams swapped players and draft picks in the last hours of the deadline for the betterment of their team, but few trades held star players.

Three out of 30 teams decided not to partake in the trade deadline frenzy, and two of those teams could furthermore enhance their teams by making some trades. The Calgary Flames decided not to keep their roster as is, which is a bold move for a team trying to grab a playoff spot. However, the Carolina Hurricanes chose not to trade anyone for some strange reason even though their dead last in their division, and fourth to last in the league. I don’t know what their GM is thinking at this point. I mean, you’re going 23-26-13 and you’re not trying to make that better? We’ll see if that pays off later on in the future.
END_OF_DOCUMENT_TOKEN_TO_BE_REPLACED