Third baseman Martin Prado was the centerpiece in a seven-player deal between the Arizona Diamondbacks and Atlanta Braves that sent Justin Upton to Atlanta. Photo by: Cristine Maybourne / Flickr

The biggest takeaway I’m getting from the Justin Upton trade is this: If you don’t project enough outward and possibly a superficial appearance of playing hard and gritty, you aren’t qualified to play for the Arizona Diamondbacks.

This appears to be the final straw in the Kevin Towers path of roster destruction. Three important players from the recent 2011 NL West winning squad (Upton, Chris Young, Ryan Roberts) have since been traded for what some would say is 50 cents on the dollar. Young was used to get shortstop Cliff Pennington, but then Towers decided he needed roughly 50 more of those, so he used their 2011 #1 pick Trevor Bauer to land Didi Gregorious from Cincinnati in a three-way deal. Veteran grit machines Willie Bloomquist and John McDonald are under contract for 2013, so you have a logjam of light hitting, good defending middle infielders.

So what is the ultimate endgame here? Their star power-hitting right fielder is gone, which would suggest that catcher Miguel Montero and first baseman Paul Goldschmidt and outfielders Jason Kubel and Cody Ross will now received the brunt of the pressure in the middle of the lineup. That’s fine I guess, but they aren’t perennial MVP candidates.

Fox sports insider Ken Rosenthal offered some insight on the motivation for this trade.

“The problem is that he didn’t play with a high level of energy,” said the former teammate, who spoke on the condition that he would not be identified. “What I think they want is guys who play with the speed, energy and intensity of the Oregon football team — all out, all the time. END_OF_DOCUMENT_TOKEN_TO_BE_REPLACED 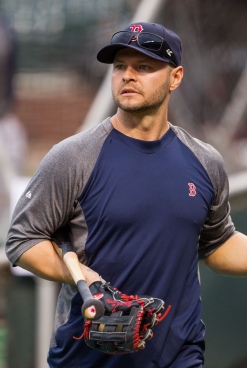 Outfielder Cody Ross would be a good fit for the Atlanta Braves next year. Photo by: Keith Allison / Flickr

Its been 19 years since the Atlanta Braves have entered the offseason without Chipper Jones on their roster.

Without Jones, the Braves have lost a little spunk on paper. Sure, he didn’t hit 40 homers or rack up 130 RBIs in a single season, but now that Jones is gone, Atlanta lacks that superstar image. Brian McCann seems as if he is out the door and Braves fans are still waiting to see a breakout year from Jason Heyward. Yes, Freddie Freeman is on the rise and the club’s pitching is as strong as it was in the days of Maddux, Smoltz and Glavine, but Atlanta can’t have its usual sleep offseason this year.

The Braves clearly have some holes in their lineup. Martin Prado will likely move to third base to fill some enormous shows, leaving a vacancy in left field. It’s also almost certain that Atlanta — given Fran Wren’s previous offseasons — won’t resign center fielder Michael Bourn, which seriously hinders the Braves’ playoff chances for next year. It’s clear that Atlanta has some areas to adress this winter. Fans just have to pray that Wren is a little more active than he has been in years past.

This year’s free agent class, headlined by Josh Hamilton and Zack Greinke, is a bit weak this year, but there’s still some very attractive options the Braves should consider. As an Atlanta fan, here are some viable courses of action the Braves could try to reach the Fall Classic next year:

• Free Agent options: There are two guys I believe the Braves will take a serious look at this winter. I have been a huge proponent for the Braves to sign Nick Swisher and this is finally the year that they can do it. Given, Swisher has never played for a National League team, the change of scenery could perhaps put some new life into the veteran’s bat. Swisher is starting to hit for more contact and the power is definitely  still there. Atlanta has been hungry for a power hitter for years. Swisher would be a perfect fit, if he is willing to play left field. The other obvious outfielder Atlanta should think hard about is Cody Ross. Since shining for the San Francisco Giants in their World Series run a few years back, Ross has seem to come into his own. The 31-year-old stuggles a bit as a contact hitter, but like Swisher, he can hit for power, too. I believe Ross’ power numbers will only climb as it seems he is beginning to enter his prime. If Atlanta can sign him, Ross could adress a big area of need right away. END_OF_DOCUMENT_TOKEN_TO_BE_REPLACED