As a hardcore Atlanta Braves fan, I would truly be remiss if I didn’t write a tribute blog to Chipper Jones one day after the 2012 season ended.

The 19-year-pro may have hung up his cleats earlier than he wanted to as his beloved Braves were ousted of the playoffs in the inaugural Wild Card round of the MLB playoffs, but I bet this season was everything he wanted it to be. Although it must’ve been a saddening experience, every single MLB ballpark that Jones played in during this final run bid him their own farewell in some very unique ways. Every club gave the 40-year old their park’s third base while others threw promotional nights for baseball fans to say their goodbyes to one of the best players who has ever graced the diamond.

In times of darkness with things like performance enhancing drugs and “chicken and beer” incidents, Jones’ final season showed us all how classy baseball can be. Jones won’t go down as the best third baseman who ever walked or perhaps even a top 50 player, but he was treated like a true titan of the game in each contest he played this season. I even made a trip from Northwest, Wyoming to Coors Field in Denver just to see No. 10 one last time and I made that very special trip my bachelor party, two months before my wedding.

Jones has clearly earned his respect. He may not have done it with his numbers, but rather his heart. I truly believe he was so well respected for more than his talent. And although he could certainly be recognized on talent alone, there was just something different about Chipper. Maybe it’s because he spent his entire 19-year-career in the same uniform. Maybe he is so highly regarded because he was never within a 10 foot pole’s reach of any sort of steroid conversation. Above all, I believe most baseball fans honored Chipper because he is that sort of “Mr. Baseball” kind of guy.

He has the neat nickname. Chipper plays the hot corner and did it despite bad knees. He was a World Series champ and the poster boy of Bobby Cox’s run at 19-consecutive N.L. East division titles. While some just watched the Braves for their pitching, they always knew No. 10 was the one hitter you always had to watch out for. While some players will earn their honors in the stat sheets, Chipper took the hearts of MLB fans by being himself — a grown man that played the game for the simple joys of it and the people who looked up to him.

So thanks for 19 years Chipper. I hope retirement is all that you want it to be. Although I will be looking for your name in next year’s starting lineup, I’m truly proud to have been a baseball fan during your career.

Chicago Cubs starting pitcher Ryan Dempster has drawn a lot of interest from teams as the MLB Trade Deadline approaches with his 2.11 ERA. Photo by: Joselito Tagarao / Flickr

With the recent loss of Brandon Beachy to Tommy John surgery, the Atlanta Braves‘ rotation is currently a question mark.

The Braves are rumored to be interested in Chicago Cubs‘ starters Ryan Dempster and Matt Garza. Garza earns $9.5MM this season and will be arbitration-eligible for the final time this offseason. He currently has a 4.07 ERA, but he is still only 28 years old and has a 3.85 career ERA.

The Braves’ starting rotation currently has the fourth-worst ERA in the National League. Those numbers include Beachy, who was the major league leader in earned run average. Tommy Hanson is the only pitcher with above average numbers at the moment. Tim Hudson has had an up-and-down season thus far and will likely be pitching with ankle soreness for the remainder of the year. END_OF_DOCUMENT_TOKEN_TO_BE_REPLACED

MLB Opening Day: Will Johan Santana bounce back in 2012?

When the New York Mets announced pitcher Johan Santana would be their opening day starter this season, I was a bit surprised.

My reaction wasn’t because Santana doesn’t have the talent to be the lackluster Mets’ ace, but because of his injury issues. I had to ask myself, ‘Would he be ready?’ Santana certainly proved that he was more than prepared, throwing five innings of scoreless ball against the Atlanta Braves in a 1-0 victory for New York on Thursday afternoon.

So how much confidence can baseball fans have in Santana now? After all, he faced a mediocre Braves offense in his first start. But even I — and avid Braves fan — have to tip my hat to Santana. Although Atlanta’s offense is a huge weakness within the squad, the former two-time Cy Young award gave up just two hits while striking out five in his first start since the lefty suffered a tear in the anterior capsule of his left shoulder repaired on Sept. 14, 2010.

Talk about a comeback start. So how long should we expect Santana to keep this sort of dominance up? It’s hard to say, considering this was New York’s first game of the season, but if can resemble the pitcher he once was — like he did in the Mets’ win over Atlanta — we should expect a lot from Santana this season. END_OF_DOCUMENT_TOKEN_TO_BE_REPLACED

Atlanta Braves third baseman Chipper Jones announced that he will retire after the 2012 season. Photo by: SD Dirk / Flickr

It’s never easy to quit something you love.

Atlanta Braves third baseman Chipper Jones know that all too well, announcing his retirement effectively after the 2012 season. There’s really no question that the hours following that warm afternoon must have been hard after the 40-year-old declared his decision when his beloved Braves wrapped up what would be one of Jones’ final games at Atlanta’s camp in Lake Buena Vista, Fla. The choice was one that had been coming and one that any press member following the team was salivating to hear.

The Braves came into the Spring with the same ‘ol team that fell flat on its face during a September collapse that ended one game short of yet another playoff birth. Yet, the spring training attention wasn’t focused on how Atlanta would bounce back. Instead, for about the third year in a row, all eyes were on No. 10. And all ears were waiting to hear if Jones would continue to play another season despite his constant leg problems that have haunted the corner infielder. END_OF_DOCUMENT_TOKEN_TO_BE_REPLACED

We told you we would be back! Couch Side, the podcast, returns for it’s eighth episode. Host Wade McMillin and fill in host, Phil Quick (no pun attended) hit the latest NFL headlines hard. Listen to the Phil’s debut with Wade as the dominant duo discuss Peyton Manning signing with the Denver Broncos, Tim Tebow’s trade to the Jets, the New Orleans Saints Bounty Program, Chipper Jones’ retirement, Michael Bush signing with the Chicago Bears and the Sweet 16 of the NCAA men’s basketball tournament. Click below to download or stream Couch Side the podcast …

No longer will the skipper climb out of the dugout, walk to the mound and signal for the closer in the seventh inning, heck, rarely will they call for him in the eighth. Most guys throw one inning, unless it is an important game, then the closer will get the next game or two off. Either way, closers are the guys who slam the door shut, or are the goat for the night. Here’s a few pitchers who I would call upon in the ninth innings this season. 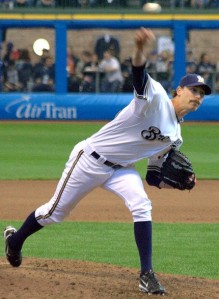 Shoved into the closer role, Axford did not disappoint. He posted 46 saves, 86 strikeouts in 73.2 innings pitched and blew only two saves. He got stronger after the all-star break and cut down on his walks. His 49 percent ground ball rate helped him record an ERA of 1.95. Although he has Francisco Rodriguez behind him, Axford has proved to be composed. One thing that worries me is his 59 hits given up. He will need to get more swing and misses without the same lineup in Milwaukee. END_OF_DOCUMENT_TOKEN_TO_BE_REPLACED