Is Shane Doan the most under-appreciated athlete in Arizona sports history?

Phoenix Coyotes veteran Shane Doan has been in the Arizona desert for his entire 15-year career, but is he appreciated by fan in the Grand Canyon State? Photo by: Bridget Samuels / Flickr

What are the odds of Shane Doan being recognized if he walked into any random supermarket around Phoenix at any point between 1996 and 2011? I’m not sure, he’s a big guy, but you could find plenty of 6-foot-2, 220-pound bros at your local gym.  If you lined him up with Luis Gonzalez, Steve Nash, and Larry Fitzgerald, who do you think an average Arizona sports fan would gravitate to first?

Maybe at this point his popularity has increased incrementally, but over the past 15 years, given the amount of coverage the Phoenix Coyotes have received, I doubt Arizona fans have given Doan his proper due.

He’s the longest tenured professional athlete in Arizona sports today, and a last remaining member of the original Winnipeg Jets when they moved to downtown Phoenix in 1996, but I’m wondering how much he’s really appreciated overall. To give his time here some perspective, there are no current Expos with the Washington Nationals, and it’s been around seven years since that franchise moved from Montreal. You seldom get players to stick around in the same city for an extended period of time, and Doan has done it with the least popular franchise in Arizona.

How overshadowed has Doan been? Let’s think about the other three sports teams in Phoenix.

END_OF_DOCUMENT_TOKEN_TO_BE_REPLACED

Arizona Cardinals quarterback Kevin Kolb will enter training camp with a chip on his shoulder after a disappointing season in 2011. Photo by: Lehigh Valley, PA / Flickr

I’m sure you are aware of the news that your team, the Arizona Cardinals, are no longer in the running for the services of Peyton Manning. That revelation came to disappointment for many Red Birds fans alike, but probably came as a relief to you.

Take the news with a grain of salt, because it says something about you too.

Sure, you were injured for most of last season because your offensive line was like a swinging saloon door at the entrance to an Old West tavern. And yeah you had a miniscule off-season to learn, understand and execute a new offense.

But signing that massive contract extension put a target on your back to perform well when you were physically able to and you did not come through.

Now with this Manning frenzy, the Cardinals were thinking of cutting you if they were to land the future Hall of Famer. Well, they did not and Manning is down to two other teams.

Now is the time to get down to business and prove to the fan base that you are an NFL-caliber quarterback. Your 58 percent completion rate, nine touchdowns and 1955 yards in 2011 are not enough. Neither is your 3-6* record as a starter (the asterisk is because you were knocked out of one game very early and your team still won).

When you come up to training camp this summer, you better have a huge chip on your shoulder. END_OF_DOCUMENT_TOKEN_TO_BE_REPLACED

Where is Manning headed? 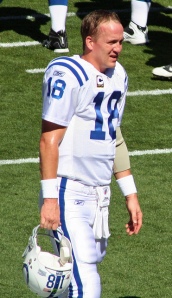 An ongoing feud between Peyton Manning and Indianapolis Colts owner Jim Irsay may mean the 11-time Pro Bowler could end up with another team this offseason. Photo by: Jeffrey Beall / Flickr

With media from all over the country in Indianapolis to watch the Super Bowl, there has been plenty of time to analyze the Peyton Manning situation. Will the Colts let him go, keep him to teach Stanford’s Andrew Luck, or build around him in this April’s upcoming draft?

The ugly spat between Manning and Jim Isray is very public, and after all the things said in the past week, each day passing, there’s less hope for Manning to continue his career in Indy. With Manning healthy, there could potentially be half the teams in the NFL asking about him. Some obvious landing spots for the future hall of fame quarterback are the Washington Redskins, the Arizona Cardinals, the New York Jets and the Miami Dolphins. But keep an eye out for the Cleveland Browns, the Denver Broncos, the Seattle Seahawks and the Tennessee Titans. The only reason I didn’t put the San Francisco 49ers as a suitor is because as bad as Alex Smith has been in the past, this season he was a Kyle Williams away from heading to the Super Bowl.

Here’s my take on who will wind up with Mr. Manning.

END_OF_DOCUMENT_TOKEN_TO_BE_REPLACED

Patrick Peterson emerges as top defensive back in first season

After being named college football's defensive player of the year, former LSU tiger Patrick Peterson quickly found success in his first year in the NFL.

The Arizona Cardinals made the right decision in the 2011 NFL Draft.

Instead of trying for a quick fix with their quarterback issues, the Redbirds went the defensive route, electing to take defensive back Patrick Peterson with the No. 5 overall pick. And the rookie has yet to make them regret that decision.

But first, why did the Cardinals decide to go with Peterson over the multitude of prospects that could have also helped them immediately? Simply put, its because Peterson is a freak of nature — in a good way. Listed as cornerback, he has a safety’s build at 6-foot-0 and 219 pounds and cornerback’s athleticism, possessing a 4.34 40-yard dash time and a 39 inch vertical. He was widely regarded as the best athlete in the draft, and many had him going first overall. When he fell to No. 5, Arizona did not have much of a choice.

Peterson compiled an impressive career as an LSU Tiger, playing every game of his collegiate career. The Florida native recorded seven interceptions, four in his junior year, and returned two punts for touchdowns. He spent only three years in Baton Rouge but his final year was stellar and earned him the SEC Defensive Player of the Year and an All-American nod. Peterson also received the Thorpe (best defensive back) and Bednarik (best defensive player) awards for his performance.

But, when he got to the big time, his process was halted by an ugly, heated standoff between NFL players and owners, thus reducing the amount of time Peterson would have to get used to the professional level. But the cornerback never seemed to miss a beat, adapting to Ray Horton’s defensive schemes quickly and earning a starting nod come opening day, where he made a grand debut by returning a punt 89 yards for the eventual game winning touchdown to beat the Cam Newton and the Carolina Panthers.

Peterson would not stop there. The rookie returned three more punts for touchdowns, including a 99-yarder in overtime against the Rams to give the Cards their second win of the year. The four return touchdowns tied an NFL record for a season and he nearly got a fifth in the final game of the year against the Seahawks.