A couple of days ago, you witnessed the unveiling of my first round preview for the Western Conference playoffs. Now you have the grand opportunity to indulge in my Eastern Conference preview. Enjoy.

New York Rangers goalie Henrik Lundqvist was in the NHL's top five for wins, save percentage and win percentage this season. Photo by: Gregory Manno / Flickr

The Rangers have looked like one of the NHL’s elite teams all season, and who could blame them? They have outstanding goaltending in Henrik Lundqvist, offensive firepower in Marian Gaborik, Brad Richards and Ryan Callahan and a consistent blue line presence with Marc Staal and Dan Girardi. They are a solid team all around and have the “New York” aura around them.

The Senators, after missing the playoffs last year, are back and looking to play spoiler. Led by the always dangerous duo of Jason Spezza and Daniel Alfredsson, Ottawa will always look to their mainstays to guide the team. Defensively, Erik Karlsson and Sergei Gonchar hold down the fort while goalie Craig Anderson has had a decent season in net (2.84 GAA, .913 save percentage).

In order for the Senators to at least stay competitive, they will need superb play from Anderson and have a point-per-game pace from their gunners, Alfredsson and Spezza, along with Milan Michalek. And that is just not happening. The Rangers are too good on all three fronts and should pepper Anderson with enough shots from all angles to make his head spin.

END_OF_DOCUMENT_TOKEN_TO_BE_REPLACED

It is tough to find the words to describe how poorly the Washington Capitals are performing. Embarrassing, is one. Terrible, could be another. This year they have 29 wins, 26 losses and 5 overtime losses and are currently in third place in their division, 20th in the league. How can you go from a semi-final dominant team to this?

The Caps should be a powerhouse in the National Hockey League. With players like Alexander Ovechkin, Alexander Semin, Nicklas Backstrom, Mike Green, Mike Knuble, Karl Alzner and John Carlson, they should beat teams left and right. But they’re not. In their past 15 games, they’ve won four times. They even lost to the Carolina Hurricanes 5-0 on Feb. 20. This isn’t Squirt hockey;  the Capitals should be putting at least one goal on the board against a team like that.

END_OF_DOCUMENT_TOKEN_TO_BE_REPLACED 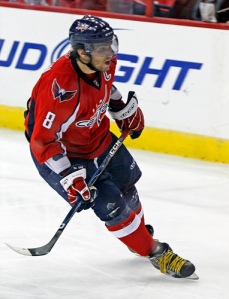 Last year, Sidney Crosby said he was going to miss the NHL All-Star game to protest the league’s player safety policy. As time elapsed, it was his concussion problems that kept him out of the All-Star game.

Now, the other famous hockey star, Alexander Ovechkin, decided he would not participate in the most thrilling game of the NHL season. On Jan. 23, Brendan Shanahan (Senior Vice President Player Safety and Hockey Operations) announced that Ovechkin would be suspended three games after his hit on Pittsburg Penguins defenseman Zbynek Michalek. Shanahan said Ovechkin “launched” himself at Michalek, leaving his feet and made unnecessary head contact.

“The moment Ovechkin launches himself into the air prior to the hit he becomes responsible for any contact to the head,” was Shanahan’s explanation for suspending arguably the league’s most interesting player. Incidentally, the NHL’s All-Star game fell right between Ovechkin’s suspended games.