Tim Tebow may not have a future as a quarterback in the NFL, but he indeed has a future.  Tebow who is a magnet for attention, could try his hand at TV, and would definitely have his list of suitors.

The New York Daily News is reporting that ESPN or Fox Sports could end up making a push for Tebow as a college football analyst.

ESPN believes the former Jet will be playing football in 2013, but if not, he’s on the network’s radar as a college football analyst, according to the New York Daily News.

There will definitely be competition from Fox Sports who would deem the former Florida Gators and Heisman Trophy winning quarterback as a coup for their all sports network set to debut in August.

It definitely makes sense for Tebow if he wants to stay around the game he loves, while still getting plenty of attention and eyes from his loyal following.

May 7, 2013 | Categories: College sports, NFL | Tags: jets did tim tebow dirty, Tim Tebow, tim tebow as espn analyst, tim tebow's future in the nfl, what teams are interested in time tebow, what's next for tim tebow?, where will tim tebow play, who will time tebow play for, will espn hire tim tebow | Leave a comment

Like I posted in my first blog, the Frozen Four is an equivalent to the Final Four in basketball except with hockey.
The four College teams competing in 2013 were the Yale Bulldogs, Quinnipiac Bobcats, St. Cloud State, and UMass Lowell. All four teams fought their way up to the tournament they all have dreamed of winning. The first semi-final game was UMass Lowell against the Yale Bulldogs. Throughout the beginning of the tournament, it was said that Yale was the “underdog,” and that their chances of going past the first round was slim.
Yet they defeated UMass, who was #3 seed, with a score of 3-2, winning in OT with the final goal scored by their Senior Captain, Andrew Miller. Leaving a stunned UMass Lowell crowd silent, the Bulldogs celebrated their first win, as they were now moving on to the championship round. The next game of the night was to be played by the Quinnipiac Bobcats and St. Cloud State. Quinnipiac had been the #1 seed team this season, so they definitely had quite the “rowdy” fan section.
END_OF_DOCUMENT_TOKEN_TO_BE_REPLACED

BY JESSICA WILLIAMS,Couchsideshow.com contributor
At the moment, I am laying in a hotel bed, in a city I’ve never been in before, researching College hockey teams.
Some people might think this is odd, but it is no different than a basketball fan looking up College basketball teams for the Final Four. Though many folks don’t know this, there is a hockey equivalent to the Final Four; it is known as the Frozen Four. The location of the Frozen Four is different every year, with different teams, and different fans attending the games. This year the tournament is held in Pittsburgh, Pennsylvania. I’ve begun to wonder if these people rooting for specific teams are actually fans, or just band-wagoners.
I say this because when you ask these people who they are rooting for, 80% of the time it is the #1 seed team in the tournament. If that just so happens to be their favorite team, then so be it, but usually the difference between a real fan and a bandwagon fan is easily recognizable. For instance, a real fan might know people on the team, or have all the fan attire supporting the team. If you ask one of these fans a question about their team, be prepared to have a conversation longer than an elevator ride.
On the other hand, bandwagon
fans might give you very short, to the point answers about their “favorite team”. Lesson being, when going to a sports tournament of any kind, make sure you do your research on the teams so you don’t get caught as the bandwagon fan.

Find out in this week’s episode who Couch Side has winning it all in the NCAA men’s basketball tournament. Photo by: Jason Helle / Flickr

In the 52nd episode of Couch Side, hosts Wade McMillin and Craig Paul talk a lot of hoops. Special guest and senior blogger Matthew Vinsko joins the podcast this week to discuss his win in Couch Side’s All-Time NBA Fantasy Draft and he sticks around to banter about the NBA playoff picture. Then, Craig and Wade preview the Final Four and give their predictions of who will reign supreme on the college hardwood in 2013. The hosts wrap up this week’s show with headlines from around the NFL, many of which have to deal with quarterbacks finding new homes. Click below to start streaming, downloading or subscribing to the Couch Side podcast:

Starting Five: Kansas and the NBA 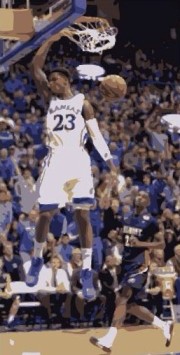 Ben McLemore could be an NBA lottery pick. Photo by: Darin and Shannon White / Flickr

Well, it took some time, but I am finally over my Kansas Jayhawks losing to Michigan in the Sweet 16 of the NCAA Tournament.

Truthfully, most of my resentment came from Elijah Johnson’s poor decision-making in the closing seconds of overtime that potentially cost them a win. It was the best game of the tournament, and possibly the game of the year in college basketball, and I am thankful that KU was part of it.

But, it’s over now, and regardless, I’m still “Rock, Chalk” all the way, and will be forever. Now, we have to look to the future and for Kansas, that means a new starting five because this season’s normal starting line-up of Elijah Johnson, Ben McLemore, Travis Releford, Kevin Young, and Jeff Withey are either graduating or going to the NBA.

And that is what this blog is about. Determining what the future holds for those five young men, who bled crimson and blue in their time. For purposes of listing and building anticipation, I’m going to go in reverse order of what I think about their chances to be in the NBA.

A workhorse through his two years at Kansas after transferring from Loyola Marymount, Young played as an undersized power forward for the Jayhawks. His main job was to hit the glass for rebounds, use his underrated athleticism, and be a hustler for coach Bill Self. And he did a mighty fine job of it. Unfortunately, those skills don’t really translate to the NBA, especially when you combine his lack of true offensive talent — not being able to create his own shot, a bad looking jump shot, little ball-handling skills, etc. He is a likable guy and worked hard during his stint in Lawrence, but there is no real future for him in the pros, unless he really puts in the work but at his age, time is already passing by quickly.

• NBA Comparison and Future: None, and overseas or coaching.

END_OF_DOCUMENT_TOKEN_TO_BE_REPLACED

The Couch Side podcast is on the right side of 50 as hosts Wade McMillin and Craig Paul embark on another exciting episode. In this week’s show, the gang discusses which NFL were winners and losers in this year’s NFL Free Agency class. Then, special guest Sean Schoonover joins the podcast to preview the 2013 MLB season and talk a little bracket busting. Click below to start streaming, downloading or subscribing to the Couch Side podcast: