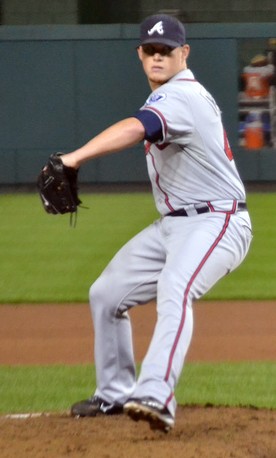 Atlanta Braves closer Craig Kibrel tops our list of the best closers in all of baseball. Photo by: Taylor Magnone / Flickr

When identifying the top closers of the MLB, one must consider players whom possess the ability to handle pressure, whom can pitch to location while maintaining velocity, and whom can still throw that filthy off-speed pitch 3-2 for strike three. They are dealt with some of the most nerve racking moments, and the game rest in their hands during that final half inning, a run given up usually leads to defeat. The following list includes the 10 best closers going into the 2013 season, starting with players 10-6 and their 2012 statistics. Players left off the list and who most likely make up the 11-15 spots include: J.J. Putz, Joel Hanrahan, Huston Street, John Axford, and Tom Wilhelmsen. With that here are your projected ten best closers for the 2013 season:

9. Greg Holland (Kansas City Royals (2.96 ERA, 16 SV, 91 Ks, 1.37 WHIP, 1.7 WAR): Holland suffered from a rib injury during the first half of the season last year, but after he fully recovered he lit it up as first the setup man and then the closer. His numbers last season were superb considering the injury, with converting 16 of his 20 save attempts, while posting a 12.2 K/9 innings ratio to go with a 2.68 K/BB ratio. I’m predicting a 30 save season for this youngster especially with a revamped Kansas City Royal squad.

8. Sergio Romo, San Francisco Giants (1.79 ERA, 14 SV, 63 Ks, ,849 WHIP, 1.8 WAR): Romo filled in impressively after Brian Wilson was shelved with another Tommy John injury, helping lead the Giants to their second World Series title in three years. Romo has one of the best combinations of command and filth in the hyper-strikeout era we are in today, it also helps that he is on a very successful Giants squad.

7. Jim Johnson, Baltimore Orioles (2.49 ERA, 51 SV, 41 Ks, 1.019 WHIP, 2.3 WAR): Johnson had a breakout season in 2012, leading Major League Baseball with a stunning 51 saves. He is definitely against the norm when it comes to an ideal closer as he is anything but a strikeout pitcher, posting a rather pedestrian 5.4 K/9 innings last season. I believe Johnson will be a very effective closer for the Orioles this season but don’t expect him to post a duplicate 50 save season.

6. Mariano Rivera, New York Yankees (2.16 ERA, 5 SV, 8 Ks, .960 WHIP, 0.4 WAR): Yes I know he is 43 years old, and coming off a major knee injury. However he is hands down the best closer of all time, and I am predicting another great year from him. What amazes me about this guy is that only one season out of his illustrious career as a full time closer did he fail to reach 30 saves in a season, not counting last season. He is for real.

Papelbon is definitely back in full force as a dominant closer. His first year with the Phillies last season he posted career highs in both innings pitched and strikeouts with 70 and 92 respectively, to go with an 11.8 strikeout per 9 inning ratio, which is above his career average . One thing that he brings to the table is consistency; he has now posted 7 straight seasons of better than 30 saves and at least a 10 K/9 inning ratio. Papelbon might have been the biggest bright spot for the Phillies last year, and I am expecting him to produce another career year in 2013.
END_OF_DOCUMENT_TOKEN_TO_BE_REPLACED

The Couch Side podcast is on the right side of 50 as hosts Wade McMillin and Craig Paul embark on another exciting episode. In this week’s show, the gang discusses which NFL were winners and losers in this year’s NFL Free Agency class. Then, special guest Sean Schoonover joins the podcast to preview the 2013 MLB season and talk a little bracket busting. Click below to start streaming, downloading or subscribing to the Couch Side podcast:

Brian Urlacher shocked the football world when he turned down a one-year offer from the Chicago Bears, making him a Free Agent. Photo by: Mike Morbeck

Since the moment he and the Chicago Bears parted ways, linebacker Brian Urlacher has been connected to the New York Giants through rumor and speculation. That continued recently when Bill Barnwell of Grantland suggesed that Urlacher would be a perfect fit for Big Blue if he desired to remain in a 4-3 scheme.

Even Dan Graziano from ESPN recently suggested that Urlacher would “make sense” for the Giants.

“Urlacher’s only NFC East fit is the Giants. He’d provide a presence in the middle of their mediocre linebacking corps — certainly offering more than recently signed Dan Connor would. He’s a veteran for a veteran locker room. He surely would like to go to a contender, and the Giants always are that. The Giants are the one place in this division where he’d fit. The only question is whether they’re interested, and to this point they do not appear to be.”

We at Giants 101 have attempted to avoid this topic, but like the daily “any update on Victor Cruz” question, it’s become unavoidable. Even with the addition of Dan Connor, fans and pundits have been unable to avoid the question: “Does it make sense?” The answer, quite simply, is yes … if this were 2007.

Ed Valentine of Big Blue View recently took on this question himself and came to the same conclusion we reached here at Giants 101: at this stage of his career, Urlacher is not only a bad fit for the Giants, but would be a downgrade in comparison to Connor, who was highly rated prior to his poor season in the Dallas Cowboys’ 3-4 system. END_OF_DOCUMENT_TOKEN_TO_BE_REPLACED

Relievers can be difficult to project because performance can sway so drastically from season to season. The limited number of innings, and the various situations the pitchers are used can lead to occasional spikes or dips in results. Sometimes you don’t know if your established 8th inning guy will have to take over closer duties, which can also affect his numbers depending on the situations he’s used in. I’m not of the mind that a minute number of relievers can close; most guys can do it if they have a big fastball that can be consistently thrown for strikes. However, given how much of a financial incentive it is to be a big time closer, teams will overvalue based on saves, when they should really be looking at how effective the pitcher was overall. I digress, so here are my top 5 setup men aka potential closers that currently aren’t.

Former Team Mexico/USA pitcher is underrated, he improved his strikeout rate and lowered his walk rate in 2012, and figures to be used by Kirk Gibson to trade off the 7th or 8th with the inferior Heath Bell.

Let’s throw out that blowup inning against the Cardinals in NLDS game 5 last year, Storen is going to be getting key outs against the Braves lineup for a team that many will predict to win the World Series this year.
END_OF_DOCUMENT_TOKEN_TO_BE_REPLACED

Atlanta Braves prospect Joey Terdoslavich has had an amazing spring training, but might not be on the opening day roster. Photo by: Big West Conference / Flickr

However, when it comes to being a Braves fan, the stats that a handful of their younger players are putting up this spring call for a lot of attention. Now, don’t get me wrong, I absolutely loved what Atlanta did this offseason. The acquisitions of B.J. and Justin Upton makes this team an automatic contendor in 2013 just a few short months after Chipper Jones announced his retirement.

But the additions scare me a little bit, considering the caliber of young position players the Braves have waiting in the wings. Today, I wouldn’t trade what the Braves did this offseason to see if these younger guys pay off. But it would be flat out nieve to think Atlanta’s solidified outfield might block or even cause some of these young stars to find new teams.

Here’s a look at a handful of those hot position players and why they would make the team most years:

The 24-year-old first baseman / outfielder definitely has his path to the majors blocked by the likes of Atlanta’s stellar outfield and with the emergence of Freddie Freeman, he just can’t find a home on the big league roster. Terdoslavich was being groomed in the minors to eventually fill Jones’ cleats, but because of poor defense, the Braves has to explore other defensive postions for the young slugger. He has dabbled behind the plate and in the outfield. It obviously didn’t work out as Terdoslavich is listed as a first baseman on Atlanta’s Spring Training roster. It seems the Braves don’t trust much in his outfield defense, either. I’m just not sure if it would matter because of the players higher than him on depth chart. Sure, the Braves could use Terdoslavich as a pinch hitter, but that usually doesn’t suit younger players to well. Terdoslavich has proven he belongs on the big league roster this season, hitting .432 with one home run and eight RBIs in his 37 at bats this spring. He probably won’t make it, though, and begin the season in AAA.  END_OF_DOCUMENT_TOKEN_TO_BE_REPLACED

The Couch Side All-time NBA Fantasy Draft concluded about a week and a half ago. The teams were picked. Judges have dished out their decisions and we have a winner! For those of you who didn’t get a chance to listen to these special edition podcasts, click here to access them via iTunes or follow the links and clicks below:

Now that access to the All-Time NBA Fantasy Draft has been granted, let’s unveil the teams and how they were ranked. Couch Side asked three judges, Chris Etling, Chuck Constantino and Vin Cappiello to rank the teams one through five, based on talent and how the team would mesh. A very huge thank you goes out to those judges, especially Chris, who offered a deep analysis of each squad. You can check out more of Chris’ works and podcasts by visting his blog site, atthebuzzershow.com.  Here’s a look at that analysis, team rosters and how the voting broke down of Couch Side’s top 100 NBA players of all time by position:

• Analysis by Chris Etling: At first glance, this lineup looks bizarre to me. Then I start thinking about the synergy of offense and defense that the starting five can bring, and I change my mind. Robertson changed the point guard position with his blend of scoring, rebounding and passing, and he’ll have two tremendous shooters in Durant and Miller to help space the floor. That gives Abdul-Jabbar and Duncan plenty of room to operate in the post where they’re most effective. Defensively, Duncan helps cover for Kareem’s deficiencies, and the rest of the lineup is solid. The bench includes the enigma that is Pistol Pete and some rock-solid players like McHale and Thomas. And since this team is playing for pride and not an NBA title, Patrick Ewing might actually contribute.

• Championship comments: “I had a lot of fun teaming up with five fellow NBA fans to take a look at the past, present, and future of the NBA,” Vinsko said. “I’m happy my knowledge of my favorite sport has led me to make the decisions I did regarding drafting. I had a blast researching the best players at each position to put together what I deem a super team, and thank everyone involved for putting this together. I think a similar draft or panel in the future would be equally stimulating, and hope to continue contributing anyway that I can.” END_OF_DOCUMENT_TOKEN_TO_BE_REPLACED