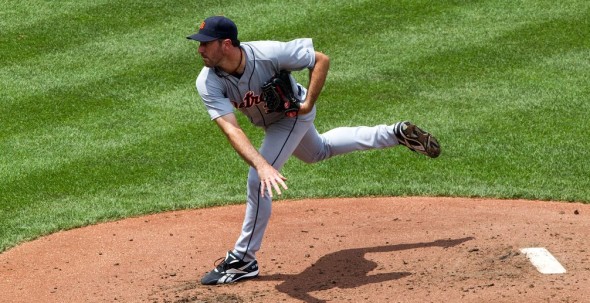 Editor’s note: Couch Side is very pleased to bring back its annual MLB preseason position power rankings. This year, we will offer two positions every Wednesday and Friday. Each blog ranks the top 10 players at each position and is written by some of Couch Side’s best bloggers. The following is part one of what will be a 12-part series. Enjoy!

It’s not too hard to identify who the top starting pitchers in baseball are. High strikeout, high innings counts are the biggest factor when ranking the elite talent in the game. Taking age and past performance to account is extremely important when compiling a list, especially since pitcher health can be extremely volatile.

I’ll start off my briefly mentioning by 6-10 on this list. Names I had to leave off, but probably fit into 11-15 are CC Sabathia, Matt Cain, Yu Darvish and RA Dickey.

I’m willing to take some flak for this one, but I’m betting highly on Greinke’s upside to put him in my top 5. He has elite stuff, can hurl it up to 95 with a devastating change up and slow curveball. One problem with defending Greinke is that he’s had recent years of ERAs nearing 4, despite his high strikeout output (career 8 strikeouts-per-9); some of it can be explained by the stat Fielding Independent Pitching (FIP). FIP calculates ERA based solely on pitcher walks, strikeouts, and home runs allowed, without factoring things out of the pitchers control like the play of his fielders behind him. So in theory, FIP says what your ERA should be in a perfect world, even while admitting that baseball is never perfect. Here are Greinke’s ERA and FIP the past three seasons.

His ERA being consistently higher than his FIP despite his ability to get strikeouts is odd. For some reason Greinke hasn’t been able to prevent blowup innings, which some might chalk up to his mental fragility. I’m not going to play this card, because Greinke received a massive contract  to pitch most of his games in Dodger Stadium, and other favorable pitchers parks in the NL West. Getting to face some weaker lineups can easily boost his numbers to the point where he’s looked at as a true elite pitcher.

The pitching phenom had a controversial 2012 season in which he was shut down in September, amidst controversy. Only 24, the first round pick of the 2009 draft has struck out a staggering 313 batters in 251 innings over the past three seasons. He can throw 98 with a 90 mph change up on his best day, and will obliterate hitters with an 80 mph curveball. His upside pitching over a full season is astronomical; he can be the next Justin Verlander or Mark Prior depending on how his arm handles a full season workload. Lucky for him, Dusty Baker isn’t in his dugout abusing his pitch count without regard for his health.

Speaking of risky long term contracts for pitchers, the Mariners had agreed to a 7 year/$175 million extension, held up the deal because of an elbow issue, and then went ahead with the deal anyway.  To put it succinctly, Felix is great. Through age 26, he has logged 1620 major league innings, which is a massive workload. The tall right hander pitched a perfect game in 2012 against Tampa and finished 4th in the CY Young voting, and miraculously hasn’t begged out of Seattle to pitch for a contender (insert Yankee speculation) and with an offense giving him solid run support. Needless to say pitching for the Mariners isn’t the easiest thing if your goal is to win games on a consistent basis. One thing that shouldn’t concern anyone about Felix is that despite pitching in a great pitchers park in Safeco Field, his splits don’t suggest he’s merely a product of his environment.

Anyone who thinks Felix can’t handle the pressure outside of the Northwest would be mistaken. It would be incredibly disappointing if he ultimately doesn’t end up pitching for a playoff contender in his career.

The Dodgers ace is very happy for Felix Hernandez’s extension, because that means his next contract is likely going to run up in the ballpark of $200 or more. A CY Young winner in 2011 and runner up in 2012, Kershaw is a lean 6’3 220 pound lefty who brings the heat, and an insane slider and changeup. There’s no reason to think he won’t get better.

This one was easy, right? Verlander is the undisputed king of all starting pitchers. No one else in the game can match his ability to throw 98+ in the late innings after 120 pitches or so. His stamina to be able to maintain his velocity and stuff is amazing, and it really stands out in the era of low pitch counts and teams being careful and cautious with their pitchers. The past two seasons he has averaged a 166 ERA+ (adjusted era to the player’s ballpark, it means he was 66% better than the average pitcher) and a .98 WHIP (walks + hits per innings pitched). He limits base runners, and is able to generate high strikeout rates and groundballs; he’s the complete package for a starting pitcher at this point in time. He’s a bit older than Felix and Kershaw, but he should be able to keep up this pace for several more years assuming his heavy workload doesn’t come back to haunt him. It should be noted that he’s never been on the DL in his career.

There you have it, the top 5 starting pitchers right now.