Can Russell Wilson continue to deliver? 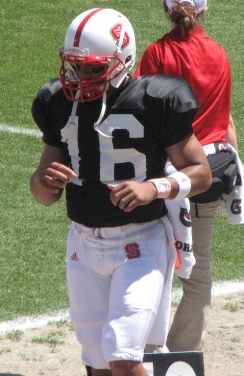 Quarterback Russell Wilson started with N.C. State and then transferred to Wisconsin before landing in the NFL with the Seattle Seahawks. Photo by: akulawolf / Flickr

In a year that features two of the most productive rookie quarterbacks, there is a third that has been making noise. Can Seattle Seahawks’ rookie Russell Wilson continue to deliver?

Nobody is confusing Wilson for Andrew Luck or Robert Griffin III. In his past five games he has 11 touchdown and just one interception. Very impressive numbers.

In the for previous weeks, Wilson averaged just  205.3 yards. That has pretty much been his story this year as he has 10 games with fewer than 240 passing yards. Obviously, a low passing total like that doesn’t make fantasy owners happy.

This week against Chicago was a different story. Wilson tied his career-high with 293 yards against a tough Chicago Bears team. The fact that he helped knock off the Bears in Soldier Field makes the feat all that more impressive. Wilson also did an RG3 impersonation this week by running for a career-high 71 yards.

While Wilson hasn’t provided a ton of fantasy points on the ground, he has averaged 42.5 yards over the past four games. Wilson has yet to run for a touchdown. When you have a runner as effective as Marshawn Lynch, you’ll lose out on those one-year plunges.

The Seahawks don’t have an ideal schedule in the coming weeks as the fantasy football playoffs get underway. Next week they face the Arizona Cardinals. They aren’t a great team, but they play the pass effectively. They have serious issues against the run so Lynch should be busy.

In Week 16, the championship week for most leagues, Wilson faces the San Francisco 49ers. Obviously it would be a serious risk to use him then.

If you don’t have a steady quarterback penciled in your lineup every week, Wilson is a decent option in Week 15. The Buffalo Bills are terrible against the run, so Lynch owners should be extremely happy, but they have issues defending the pass as well. This could be a nice spot start for Wilson.

More importantly for actual Seattle Seahawks fans, Wilson looks to be the real deal. The future is bright in Seattle.
Also check out:

Check out other great articles at lesterslegends.com.