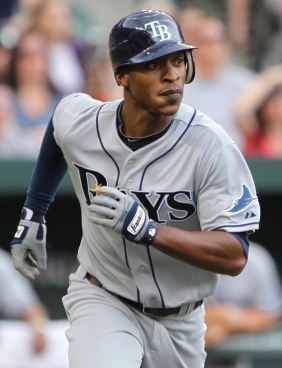 The MLB hot stove has heaten up early this offseason.

The Toronto Blue Jays started the late-fall flames with their blockbuster deal that picked up any sort of talent the Miami Marlins still had. Then Toronto struck again, signing 2012 MLB All-Star Game MVP Melky Cabrera, who will be fresh off a 50-game suspension for performance enhancing drugs. The rest of the young offseason has already seen a plethora of re-signings and small-end swaps to keep fans interested enough to care.

Just two months into this uncharacteristic MLB offseason things have been exciting without a top name free agent finding a new home. With names like Josh Hamilton, and Zack Greinke on the market, it’s unusual Free Agency hasn’t been the talk of this early offseason buzz. But all of that may have ended Wednesday afternoon when the Atlanta Braves struck a deal with B.J. Upton, who is considered the top free agent center fielder.

Upton was able to strike pay dirt, which will come in the amount of $75 million for five years. Meanwhile the Braves solidified their gaping hole in center field left by the soon departing Michael Bourn. In a nutshell, the move makes sense. Atlanta probably couldn’t afford Bourn as the Free Agency will now perhaps look for even more money than Upton. Normally, the Braves wouldn’t jump out early and spend a lot of money on one of the top free agents in baseball, but one has to believe two late-season collapses during the past two years has left this team wanting something more.

Bourn could easily be considered as the best free agent outfielder. The speedster has been one of the fastest players in the game for the past two seasons, swiping 103 bases since 2010. Bourn’s 9 home runs last year were also a career high and he showed that he still lives up to his image as one of the top defensive center fielders in the MLB. Bourn will be 30 next season, but whichever team lands him, they should still be happy because they’re still getting a top-tier outfielder for at least another four seasons.

So while the Bourn era in Atlanta is over, Braves fans will welcome in the heir apparent with open arms. Bourn offered a lot with his speed and defense, but Upton should be able to add some things the Braves were missing. Atlanta desperately needed (or need, depending how Upton will turn out) a power bat. The 29-year-old Upton should provide just that to a team that has been in the bottom half for runs scored, home runs and RBIs. Since the days of Hank Aaron — arguably — offense isn’t the way the Braves have won games. They’ve never been known to have a high power offense.

I’m not saying Upton will turn the Braves around and make them N.L. East champs, but this new look is one fans have to be excited about. Atlanta’s offseason trend usually involves the team holding onto it’s young crop of pitchers, letting them develop into players they one day cannot afford. Simply put, right now the Braves’ pitchers are very young and with that, they’re very cheap. This allowed Atlanta to make move on Upton. Every so often, that’s what this team does. The front office purges in the offseason from time to time. Atlanta did it a few years ago by trading for Dan Uggla and we’re seeing history repeat itself with the signing of Upton.

So what will this new deal do for Atlanta in 2013? If Upton is the only guy the Braves bring in, his presence alone simply won’t be enough I’m afraid. Atlanta really needs to sign one more explosive bat, who preferably hits from the right side like Upton. There is still speculation the Braves could go after Nick Swisher or explore a trade. The latest rumors have Atlanta as being one of about seven teams “interested” in Swisher while general manager Frank Wren has checked in on Minnesota Twins outfielder Denard Span.

Either of these moves would be incredible for the Braves and a perfect compliment to the Upton signing. If it’s Swisher, Atlanta would automatically gain a middle of the lineup power hitter, allowing Upton to hit higher in the order behind Martin Prado. If the Braves pull a trade for Span, they gain a Bourn-like player, who is a leadoff hitter by trade with mega wheels.

Whatever the Braves do, it’s apparent they need at least one more piece — a left fielder — to really make a dent in the standings next year. The internal options are weak with the likes of Jose Constanza or the newly acquired Jordan Schafer. Atlanta also doesn’t want to keep Prado in left field and search for a third baseman, which is really thin in the free agent market. This truly year and has to be the year the Braves make something happen in the offseason. Even with what could be an overwhelming amount of potential coming from their starting rotation, this lineup needs some help. And right now this team must strike while the iron is hot.

The Upton signing should just be the beginning. Atlanta has a surplus of young starters waiting in the wings, but no vacancies in the major league rotation for them. It’s time to get risky. Adding Upton was a good start. He just can’t be the end.

This entry was posted on November 28, 2012 by wademcmillin. It was filed under MLB and was tagged with are the braves better with justin upton, bj upton signing, braves get denard span, braves sign bj upton, can bj upton replace michael bourn, can the braves get nick swisher, denard span, how much better are the braves now with bj upton, Justin Upton, justin upton signing, Tampa Bay Rays, what will bj upton do as a brave next year.