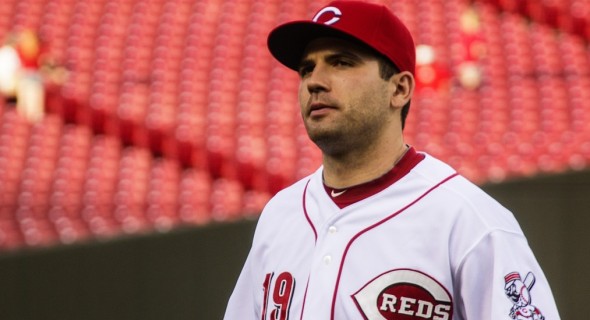 Joey Votto and the Cincinnati Reds are looking to win their first World Series ring since 1990. Photo by: Cori Martin / Flickr

• Reds vs. Giants – San Francisco should have the edge here based on the quality of pitching with Matt Cain and Madison Bumgarner starting games 1 and 2 at home. Cincinnati is countering with Johnny Cueto and Bronson, saving Mat Latos for game 3 against Lincecum. The lineups both have plenty of holes, but the Giants overall is a bit better, and I could easily see future NL MVP Buster Posey just going crazy. Dusty Baker and Bruce Bochy are both unimpressive managers based on their tactical prowess, but Bochy has fewer opportunities to makes mistakes because his team has better pitching. This, like the other series this round should prove to be highly entertaining, and will provide good fodder for the blogosphere and twitter verse.

• Yankees vs. Orioles – Orioles magic will never die; I’d argue that it’s never been stronger. Going into Arlington and eliminating the Rangers is legitimate, and now they have a delicious matchup against the rival Yankees. Camden Yards is going to rocking on Sunday, and you can throw postseason experience and every other cliché out the window, Baltimore is simply on a roll. It’s likely that the Yankees could outslug them and CC takes advantage of the free swinging O’s. Baltimore’s offense is not big on drawing a lot of walks and using patience, they just hit home runs and utilize a very effective bullpen. Manager Buck Showalter is a stronger with in-game tactics, and it showed against Ron Washington, and should exploit whatever Girardi throws at them. Of course, the talents of Robinson Cano, Curtis Granderson, Jeter, and Ichiro could be too much and the Yankees roll on, but who am I to root for the Yankees?

• Nationals v. Cardinals – It’s asinine that Washington, the team with the best record in MLB this season, is starting their postseason on the road. The logic behind the playoff scheduling is a bit absurd and counter-intuitive. Being a lower seed guarantees more first round home games, which doesn’t make too much sense. Regardless, this should be a fantastic series based on the talent and storylines alone:

• Athletics v. Tigers – This feels like the easiest series to predict. Detroit has the superior starting pitching, and I can’t see them losing based on the performances of Justin Verlander and Doug Fister. The Athletics are throwing out rookies Jarrod Parker, Tom Milone, and AJ Griffin, along with Brett Anderson in game 3. Assuming Parker, a quality starter, doesn’t outduel Verlander in game 1, Oakland will rely on Milone and his sparkling 4.83 road ERA to keep the series 1-1, which isn’t a great sign. Nevertheless, both teams feature elite power with Prince Fielder and future MVP Miguel Cabrera, contrasted by with Josh Reddick and Yoenis Cespedes. Oakland will essentially need to pitch their asses off if they have a chance of winning this one.