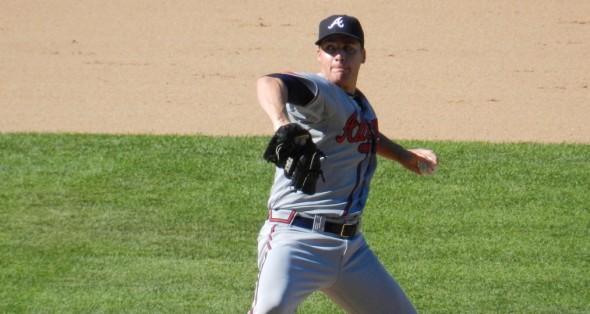 Although Eric O’ Flaherty and the Atlanta Braves have been atop the wildcard standings all season long, they would still have to play a one-game playoff with another wildcard team to reach the postseason with baseball’s new playoff system. Photo by: John W. Iwanski / Flickr

With the expansion of the MLB playoffs to include an additional wild card team in each league, baseball may finally be relevant to more than the diehard fan.

The wild card was first added in 1995 to expand each division to include 4 playoff teams. This was great for baseball and since its addition we have seen 5 wild card teams go on to win the World Series, most notably the 2004 Boston Red Sox. However, some might argue that what the St. Louis Cardinals did in 2011 (23-9 in their final games and overcoming a 10.5 game deficit to clinch the wild card) may trump the magical run that Boston put together just 7 years before.

By expanding the wild card to include two teams from each division baseball and its fans come out winners. Each wild card race is suddenly expanded to include more teams vying for a playoff spot. And with games happening every day, the races will no doubt play out until the final days of the regular season. Take the current season for example. If the playoffs still included just one wild card team, the Atlanta Braves would have a 6.5 game lead over St. Louis, and the L.A. Dodgers would be 8.5 games out of the lead. Instead, by including a second wild card team, the Dodgers are only 2 games back and have a legitimate shot at making the playoffs. Even the Arizona Diamondbacks and Pittsburgh Pirates are still in the playoff chase just 4.5 games back of St. Louis (with only one wild card spot, these teams would be 11 games back and likely playing AAA call-ups to gain experience). With the current playoff format we now have a seven team race for two spots in the NL (6 teams if you consider that Atlanta holds a 8.5 game lead over the Dodgers, the closest team that could threaten their playoff chances) and a five team race in the AL.

This is where the MLB wins. Baseball is even more relevant in September, a time when it is fighting the NFL for a fan base. You could argue that with the current popularity of the NFL, baseball only owns TV ratings and viewership on 4 out of 7 days of the week. With NFL games now on Thursday and Sunday nights in addition to Monday, baseball had to find a niche; some way to gain viewers on those days and maintain viewers on the nights they already owned. There have been some in favor of the MLB shortening its season by 25-40 games to start playoffs at the end of August and own September when it comes to viewing. Personally I’m not a fan of this and I think that expanding the playoffs is a good compromise and a great way to increase popularity among the average baseball fan.

Looking back at past MLB seasons on this date and applying the 2-team wild card scenario we would have the following:

• 2010: The AL race would not have changed, but the NL race would have been expanded to include 4 teams separated by 6 games.

• 2009: Again, the AL race would not have been drastically affected, but the NL race would have been very exciting and included 6 teams separated by 6 games.

As a fan of the game I love the wild card expansion. Baseball will always be competing with the NFL this time of year, but going forward I believe this move will increase popularity and make the game more exciting.

Want to listen to a podcast about the N.L. and A.L. Wildcard races? Check out the latest episode of the Couch Side podcast 20 minutes into the show during the “Big Picture.” Click here to listen.