The National Broadcasting Company (NBC) has broadcasted the Olympics 13 times since the games started being televised in 1936. Photo by: afagen / Flickr

BY VIN CAPPIELLO, Couchsideshow.com contributor
If you’re old, like me, likely you recall how ABC Summer Olympics anchor – the late, great Jim McKay – provided the world with the most up-to-date information on the carnage that was the Munich massacre. McKay, who already had established himself as the Wide World of Sports staple, was a trustworthy, educated and informed reporter. In a sense, he was the Walter Cronkite of sports journalism.
So when Palestinian terrorists stormed the athletes’ village on that ill-fated July day in 1972, the world held its breath as McKay delivered the news – that 11 Israeli athletes and coaches had been murdered. Murdered – at the Olympics. The Games stopped for a day, to mark the passing of these poor victims. McKay, who would go on to cover 12 Olympiads, broadcast the news for 14 consecutive hours.
I was six years old at the time, still learning what the Olympics meant. My parents had a black and white, 19-inch TV. We didn’t have cable because we couldn’t afford it. Instead, we gathered around the set and watched anything and everything ABC would broadcast. It was an event I look back on as one that defined my passion for the Olympics – the same passion my wife Lisa and I have passed along to our three daughters. We watch rowing, archery and equestrian in the summer and curling in the winter.
But something about this year’s Olympics Games doesn’t seem right. It has nothing to do with London and everything to do with Bob Costas and NBC’s, dare I say, less than stellar performance in the first few days of their prime-time coverage of the  Games. In a nutshell, they have dropped the ball, taken a hop on the landing and died down the stretch.
END_OF_DOCUMENT_TOKEN_TO_BE_REPLACED

Couch Side hosts Wade McMillin and Craig Paul continue the podcast’s official 2012 NFL Preview, examining the NFC South (hence the title Buc Fever). The guys also recap the MLB Trade Deadline in the Big Picture and dish out some more Fantasy Football advise about NFL rookies to buy or sell in this week’s segment of Head-to-Head Honchos. And for the first time, the podcast went viral, asking FaceBook friends to send in questions while Craig and Wade recorded the show Monday night. If you want to send our hosts questions you can do so by clicking on the Mailbag Tab on the homepage of couchsideshow.com. Click below to start listening:

Normally it’s pretty tough being an Atlanta Braves fan when the Trade Deadline starts to heat up.

Usually the Braves will be serious playoff contenders — if not the favorite to win the National League at the time — yet the front office doesn’t make that one move that might put Atlanta over the top. The lack of activity can be frustrating and may have even cost the team playoff births in recent years.

So when it came to this year’s Trade Deadline, I didn’t get over anxious about the Braves pulling the triggers. And then it appeared that General Manager Frank Wren did just that when reports surfaced about Atlanta acquiring Chicago Cubs starting pitcher Ryan Dempster, who led all MLB starters in ERA at the time. I was ecstatic when the story broke, but as you may know by now, Dempster vetoed the trade, killing it dead within24 hours.

While Dempster’s decision was a bit disheartening, it led me to think about what the Braves already have. Overall, Atlanta’s starting pitching can hang with just about any team’s right now if you throw Jair Jurrjens out of the conversation. A lot of that success if coming from a new face to Atlanta, Ben Sheets. The veteran righty is one of the best in baseball since signing with the Braves at the beginning of July. He may not have pitched in two years, but he looks like an ace right now with a 3-0 record and a remarkable 0.50 ERA in just three starts. END_OF_DOCUMENT_TOKEN_TO_BE_REPLACED 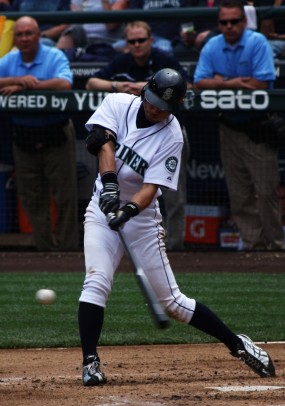 Earlier this week Ichiro Suzuki was traded the the AL East leading New York Yankees for two minor league relief pitchers the Yankees won’t miss. Although Ichiro is no longer the Japanese superstar who took the MLB by storm in 2001, a season in which Suzuki batted .350, notched a rookie-record 242 hits, stole 56 bases and won both the Rookie of the Year and AL MVP awards, he is still the player the Yankees have been missing since left fielder Brett Gardner‘s season ending injury.

Suzuki today, is probably faster than Gardner, even if his numbers don’t show it. Many scouts and analysts are saying the decline in Ichiro’s numbers aren’t due to age, but he was playing down to the basement level of the Seattle Mariners. I’ll go ahead and say it’s a mix of the two. The Mariners have been nowhere near sniffing the playoffs, so this change of scenery is long overdue. While Ichiro isn’t going to be hitting .350, he can flirt with .300 hitting in the bottom of the Yankees’ order for the remainder of the season. Suzuki puts the ball in play, and some time with hitting coach Kevin Long will help his approach at the plate. END_OF_DOCUMENT_TOKEN_TO_BE_REPLACED

July 27, 2012 | Categories: MLB | Tags: how good will ichrio be for the mariners?, ichiro, ichiro trade, mlb trade deadline, New York Yankees, what is ichrios roll with the yankees, what will ichiro provide for the yankees | Leave a comment

After spending four season with the Phoenix Suns, center Robin Lopez was traded to the New Orleans Hornets on Tuesday. Photo by: Road Warrior / Flickr

Multiple sources are reporting that the Phoenix Suns will be involved in a three-team trade with the New Orleans Hornets and the Minnesota Timberwolves. The Suns will send Robin Lopez to New Orleans (where he’ll sign a three year, $15 million deal) along with Hakim Warrick. In return, the Wolves will send a lottery-protected 1st round pick and Wesley Johnson to Phoenix. The Wolves will get two 2nd round picks from New Orleans, along with the cap room to sign Andrei Kirilenko to a two year, $20 million deal.

Like with the Nash trade earlier in the summer, this deal cannot be viewed as a straight up transaction of Lopez for Johnson and a 1st. Lopez, a restricted free agent, is more or less being sent away in a sign-and-trade deal.

If the price for Lopez is correctly reported, it seems to be fair-to-good market value for a 7-foot-0, back-up center. After all, Omer Asik — like Lopez, a young back-up center — received three years, 25 million from the Houston Rockets.

Clearly, the Suns just didn’t see Lopez being a part of their future core — or being content sitting on the bench behind Marcin Gortat. Lopez has shown promise in the past, though, and as much as he tends to still be his own worst enemy on both ends of the court, he’s a lengthy big man who can run the floor and make good defensive plays. Last season was the worst of his professional career: he shot only 46 percent from the field and averaged only 5.6 points-per-game and 3.3 rebounds-per-game, all while watching his minutes erode due to the great play of Markieff Morris and Gortat. END_OF_DOCUMENT_TOKEN_TO_BE_REPLACED

From Ochocinco to Johnson again: Athletes playing the name game

The Ochocinco era is over after NFL wide receiver Chad Ochocinco legally changed his name back to Chad Johnson earlier this week. Photo by: Clay Seal / Flickr

When I read that a certain out spoken NFL wide receiver was changing his legal name back to Chad Johnson, I couldn’t resist doing a little research.

That’s right folks the Ochocinco era is officially over and perhaps the shenanigans that came with the name are coming to an end, too. Johnson made the name swap Monday morning so his brand new wife wouldn’t be burdened with any sort of silliness attached to the Ochocinco title, which proves that Johnson just might be growing up. Does that mean we should expect a new level of maturity from Johnson next season?

I won’t put my foot in my mouth and say Johnson will return to his old football form and his off-the-field antics will completely come to a screeching halt. But I have to believe we will see a new and improved Johnson next season. Consider what Johnson has been through for the past year. He had his worst season ever statistically and wasn’t exactly the most sought after wide receiver in the free agent market this offseason. In addition to those eye openers, Johnson also tied the knot with Basketball Wives star Evelyn Lozada. With the name change and what could be his final year to prove himself, I think we will see a Johnson that we’ve never seen before.

Johnson definitely isn’t the only notable athlete to change his name, either. There are actually a surprising amount of  jocks that have re-identified themselves legally. Most did it because of religion while others — like Johnson — probably did it for attention. Johnson said he did it to honor Hispanic Heritage Month, but I’m certianly not buying that. So after finding some other more famous name changes, I have formulated an opinion about a chosen few that have nothing to do with religion. Here’s a look at those particular athletes:

• Dominic Williams aka Dominic Davis: This is actually a name change that is touching. The former Houston Texans running back did it to honor his mother. You also have to like the literation in his new name, which is also why I can’t argue this decision one bit. You’ve heard of people naming their children after their grandparents or even the popular junior, right? This is no different. END_OF_DOCUMENT_TOKEN_TO_BE_REPLACED