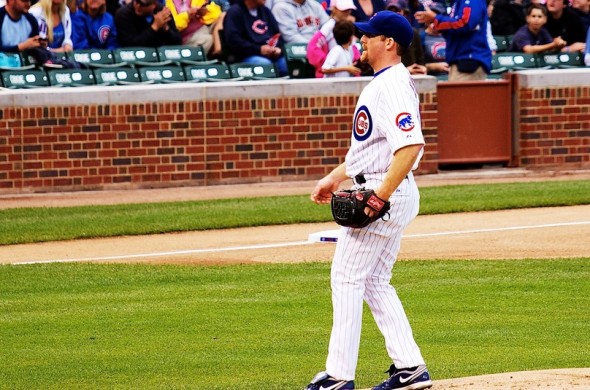 Chicago Cubs starting pitcher Ryan Dempster has drawn a lot of interest from teams as the MLB Trade Deadline approaches with his 2.11 ERA. Photo by: Joselito Tagarao / Flickr

With the recent loss of Brandon Beachy to Tommy John surgery, the Atlanta Braves‘ rotation is currently a question mark.

The Braves are rumored to be interested in Chicago Cubs‘ starters Ryan Dempster and Matt Garza. Garza earns $9.5MM this season and will be arbitration-eligible for the final time this offseason. He currently has a 4.07 ERA, but he is still only 28 years old and has a 3.85 career ERA.

The Braves’ starting rotation currently has the fourth-worst ERA in the National League. Those numbers include Beachy, who was the major league leader in earned run average. Tommy Hanson is the only pitcher with above average numbers at the moment. Tim Hudson has had an up-and-down season thus far and will likely be pitching with ankle soreness for the remainder of the year.

The Braves recalled Jair Jurrjens to take Beachy’s spot in the rotation. If Jurrjens performs like he has for the majority of his career, the Braves are getting an above average starter. He had a strong start on Friday night as he attempts to put his earlier struggles behind him.

The Braves’ last two starters are Randall Delgado and Mike Minor. Both have shown flashes of brilliance, but they have been plagued by inconsistency. With the Braves being in playoff contention, general manager Frank Wren may feel that the Braves cannot afford to have two young pitchers take their lumps in the majors.

“I think we get through the next few weeks leading up to when the trading season really begins,” Wren said. “And we evaluate what we have, how guys are throwing and who might be available.”

Either Dempster or Garza would strengthen the Braves’ rotation, but it remains to be seen if Wren will be able to obtain either pitcher at a reasonable price.

Be sure to check out other great articles at Sports Media 101.