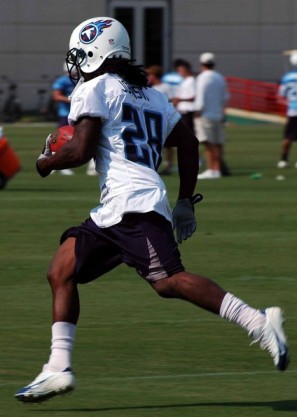 Tennessee Titans running back Chris Johnson believes he is still the best player at his position despite rushing for just 1,047 yards last season. Photo by: Vermillion / Flickr

Recently, Chris Johnson graded out as the No. 100 player by NFL Network’s popular segment, “Top 100: Players of 2012.” Considering his paltry 2011 campaign, many thought he wouldn’t make the cut, and the fact that he did drew some criticism.

Whether he is deserving of the ranking is a matter of opinion, though the Titans running back formerly known as ‘CJ2K’ still thinks pretty highly of himself.

That is certainly up for debate. Some guy named Adrian Peterson says “hello,” as does the league’s reigning rushing champ, Maurice Jones-Drew. However, Johnson has totaled more yards than any other back over the last four seasons, and seemed a little peeved that the statistic doesn’t warrant more respect.

“There’s a lot of backs now who probably didn’t do anything the year before and then they rush for 1,500 yards and they are the top back,” Johnson said. “It’s crazy, really.”

Give him credit: he’s doing everything he can to get back on the right track. After a report this offseason indicated Johnson was out of shape in 2011, he has put in a ton of work at the team’s facilities, which hasn’t gone unnoticed.

“He has been here five days a week, not three, not four. A lot of the weeks he has been here all five when that is not even necessary to do,” Titans coach Mike Munchak said.

No matter which way he dices it, Johnson has a lot of pressure to perform well in 2012. Not just to bounce back statistically, but to prove he can handle the bulk of the offense, where he’s expected to remain the focal point. He’ll be one of the top players to monitor during the upcoming season.

Be sure to check out other great articles at Helmet2Helmet.net.