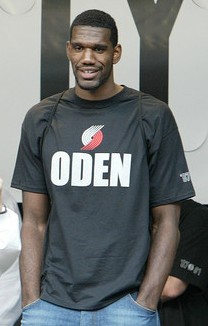 You shouldn’t be shocked by this.

Considering everything former Portland Trail Blazers center Greg Oden has went through, it isn’t surprising that he turned to the bottle and was fighting a little bit of depression.  When you have a lot of money and free time on your hand the two things you OD on are women and liquor.

Oden is a nice guy, I feel bad for him personally, but he has made more than $30 million in the NBA and hasn’t really played at all, so it’s hard to feel too bad for him. I am sure he isn’t the only athlete who has used alcohol as a coping mechanism for the good and bad things going on in their life.

Oden, who underwent five knee surgeries during his time in Portland — including three microfracture surgeries — was released by the Blazers in March. He appeared in just 82 games as a professional and hasn’t played since Dec. 2009. He spent much of his time in Portland alone or rehabilitating. All that time and freedom led Oden to alcohol, he said.

That’s because it wasn’t an NBA veteran who took Oden under his wing in his second season — it was his veteran cousin from the Air Force who moved into Oden’s house in Portland.

“If you know anything about guys in the Air Force,” Oden explained, “it’s that they drink a ton. My cousin got wrapped up in the NBA lifestyle and threw parties at my house all the time. So I got wrapped up in it too. When I played well, I’d drink to celebrate. And when I played poorly, I’d drink to forget. That second year in Portland I pretty much became an alcoholic.”

Back in June 2011, Oden’s agent Bill Duffy acknowledged that Oden had undergone “interventions” to help deal with the mental side of his injuries. He wants back in the league in 2013, but I just don’t see it happening. I wish him well and hope he does make it back, but it will and he will never be the same.

This entry was posted on May 10, 2012 by wademcmillin. It was filed under NBA and was tagged with greg oden, greg oden alcoholism, Greg Odon admits he is an alcoholic, NBA, portland trail blazers.