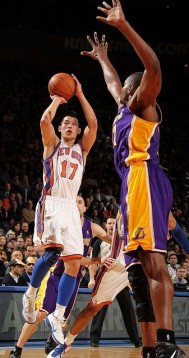 New York Knicks point guard Jeremy Lin could have a breakout year in 2013 if you don’t consider 2012 his top year already. Photo by: DV Young / Flick

I know Linsanity has already hit New York but it was short lived. After his knee injury, I think Lin will realize that he has to get himself in better shape. He openly admitted to being tired after playing in the amount of minutes he did after his promotion to the starting point guard role. Last season he averaged 18.2 points, 7.7 assists, 2 steals and 3.7 rebounds per game as a starter. I think that, if the Knicks’ make some roster changes (I want to see Dwight Howard in a Knicks’ uniform), Lin could have even better numbers. Keep in mind he doesn’t have to shoot a lot to be effective. He did shoot 44.5% last year from the field but, his best value is when he is distributing the ball. In games where Lin totaled 7 assists or more, the Knicks’ were 11-5.

Many people won’t consider Lin to be a breakout candidate but I do, and here’s why: he only played in 35 games last year, and only 25 as a starter. Lin is still relatively new to the scene and therefore, in my eyes, is a breakout candidate. If you can remember back to early February on our radio show, I called Linsanity about a week before it got mega-popular. I know what I’m talking about (non-humble brag).

Not only do I think Rudy Gay will have a breakout season next year, I think he will be a dark horse MVP candidate. That’s right, YOU HEARD ME!!! Gay, this past season, averaged 19 points, 6.4 rebounds, 2.3 assists and 1.5 steals per game. 2012 was somewhat of a down year for Rudy although, he did lead his Memphis Grizzles to the 4th seed in the Western conference. He managed to hit a career low 31.2% from three point range and 45.5% from the field as a whole. Those numbers are significantly down from the past 2 seasons. He didn’t get to the line as often either, 4 FT attempts per game in 2012, compared to 4.6 attempts per game he averaged over the past 3 seasons. If you read my keeper breakdown of Gay then you would know I see him as a possible 25/7/3 guy next season with the ability to manage one block per game.

All MVP candidates seem to have a couple of All Stars around them (LeBron James has Dwayne Wade and Chris Bosh, Kevin Durant has Russell Westbrook and James Harden), Gay has Marc Gasol and Zach Randolph. Gasol and Randolph, in my eyes, are somewhat similar to the two Laker big men of Bynum and Pau Gasol (both have helped Kobe reach his stellar numbers this past season). As long as Rudy Gay continues to show confidence in his shot, 16.4 attempts per game this year, his percentages will most likely come back to their career averages, which should up his points. If he becomes more aggressive and gets to the free throw line more often he should see his overall point production increase as well.

I know that the knock on Cousins is his off the court issues but if he keeps his head on straight, this off season, he is in line for a monster 2013 season. Cousins, this past year, average 18.1 points, 11 rebounds, 1.2 blocks and 1.5 steals per game. Cousins is a physical mismatch and, if he could get a step or two quicker, is on his way to causing problems for Western conference power forwards and centers for years to come. Cousins wasn’t shy last year shooting the ball (15.6 attempts per game) and he was well deserving of the chances, hitting 44.8% of his field goals. He also shot 70.2% from the free throw line which is a tremendous accomplishment, compared to other big men’s free throw percentages (Dwight Howard). Cousins’ style of play reminds me a lot of Josh Smith, from Atlanta, and how they both have inside and outside shots. At age 21, Cousins, is primed to explode in 2013.

I would say Andrew Bynum for the Lakers but, I feel he has already broken out in between his injury stints. I think that Ramon Sessions will have a very underrated breakout year for the Los Angeles Lakers. Sessions, as a Laker, in the month of April averaged 12.9 points, 5.9 assists, 4 rebounds and shot 45% from downtown. Sessions won’t be asked to be a big time scorer for the Lakers but he will feed off of Kobe Bryant and the big men down low. Sessions, playing a full season with the Lakers, will have a great year and I’d expect the Lakers to once again contend for a title.

Like Jeremy Lin, Ricky Rubio had an injury shortened season (41 games played). Before the European point guard went down with a torn ACL in his left knee, he was averaging 10.6 points, 8.2 assists and 4.2 rebounds per game. He also managed 2.2 steals per game. Rubio had instant chemistry with All Star power forward Kevin Love, as the two hit it off big time. With Rubio’s help, Love had a career year in 2012. I think Love will return the favor in 2013 by attracting the double team and kicking it out to Rubio. I’m expecting Steve Nashian-like numbers from the 21 year old Spaniard next season if he is to have a breakout year. The only real knock I have against Rubio is his shooting percentage. He shot 35.7% from the field last year but in 23 home games he shot a solid 37.4% from the field. I think nerves got to the kid early on in 2012 but next season he should have a breakout year.

Rubio was a huge contributor on defense as well. Not only did he average over 2 steals per game, when he was on the court the T-wolves only gave up 96.6 points per game but after he went down with his injury, they allowed 107.2 points over the teams last 15 games. Rubio will be a key piece if the Timberwolves expect to make the Western conference playoffs in 2013.

In his rookie season, Knight averaged 12.8 points, 3.8 assists, 3.2 rebounds and 32.3 minutes per game. Knight had a bit of ball control problems last year averaging 2.6 turnovers a game. He did shoot a solid 41.5% from the field and 38% from behind the arc. Knight has an underrated center, Greg Monroe, to play off of and a solid veteran cast of players to learn from (Ben Gordon at age 29 and Tayshaun Prince at age 32). Look for Knight to find his teammates more often next season while still putting up double digit points. He may not become a “popular” breakout but he will offer solid fantasy value as a late round point guard.

Batum is a restricted free agent this off season but all early reports indicate that there is a 99% chance the Trail Blazers will match any offer sheet. The Frenchman averaged 13.9 points, 4.6 rebounds, 1 steal and 1 block per game in 2012. He only played in 59 games (started 34) but he still put up career highs in points, rebounds, blocks and steals. Batum is an ideal swing man for the Portland offense as he has a solid offensive game to go along with his stellar defense. Batum as a starter last year averaged 15.2 points per game compared to 12.1 coming off the bench. If Nicolas wants to be a breakout player next year he must continue his aggressiveness, as he also had career highs in shot attempts, makes, free throws, free throw makes, three pointers and three pointers made. If Batum is handed the full time starting role look for him to have a breakout year.

Jarrett Jack was in the midst of a career season last year but it was cut short due to a stress fracture in his foot. Jack only played in 45 games last year, he started in 39 of them. He managed 15.6 points, 6.3 assists, 3.9 rebounds and all while playing a career high 34 minutes per game. If Jack comes back at full strength next season he will be in line, if his rehab goes as planned, to have a breakout season. If there is any problems or delay with his return I would look for his backup to have a breakout year…
Greivis Vasquez will get the starting role if Jack is unable to play early on next year. This past season Vasquez played in all 66 games, he started in 26 of them. In the games where he started, he averaged 12 points and 7 assists. He also shot 44.9% as a starter compared to the 41.2% off the bench.Whoever gets the bulk of minutes at point for the New Orleans Hornets next year will have the chance to be a breakout star. If the two split minutes, like they did last season, then I wouldn’t expect a lot of pub for either of these two.If you have any other breakout candidates you want to mention, feel free to leave a comment or hit me on twitter @Awies28.

Be sure to check out other great articles at Mr Fantasy Freak.