LaMichael James’ Role In The NFL 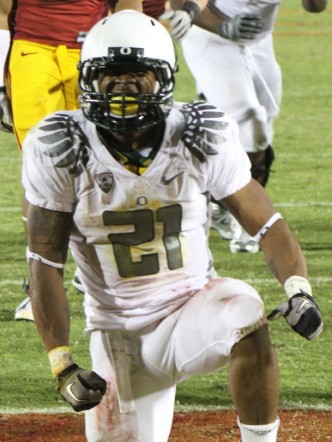 Despite having a handful of running backs already on their roster, the San Francisco 49ers selected Oregon running back LaMichael James with the 61st pick of the 2012 NFL Draft. Photo by: Neon Tommy / Flickr

With the 61st pick in the 2012 NFL Draft, the San Francisco 49ers were proud to select LaMichael James, running back, Oregon.

The 49ers are now stacked at the running back position. They have recently signed Brandon Jacobs this offseason and they still have a stud in Frank Gore. Running backs Anthony Dixon and Kendall Hunter are also on the roster. I look at LaMichael as an upgrade to what Kendall Hunter brought to the table. He is a smaller back with a ton of speed. But James brings a lot more than just speed to the table.

LaMichael knows what it is like to play for a winning program … and produce. His years at the University of Oregon were very kind to him. He ran for 1,500+ yards in all three years to help the Ducks win the Pac-12 conference (formally known as Pac-10) each year. In his final season, he had four 200 yard games that helped him record a college career high of 1,805 rushing yards. This was done even after missing two games in the middle of the season due to a dislocated elbow. In his second game back from the injury he looked like he was back to his old self as he ran for 156 yards and a touchdown after being limited to just 13 carries in his first game back.

We all know that LaMichael can handle his fair share of running the football, but with a stacked running back staff, what will be his role with this team? In order to get minutes on offense, he is going to have to show that he can catch the ball out of the backfield. This is something that he didn’t do too much of in college. This wasn’t because he couldn’t, it was that he didn’t need to. He was a very efficient rusher and the Ducks playbook didn’t call for too many screen passes.

James also stepped into the role of a punt returner this last season at Oregon. This is where I see him having the best chance of getting some playing time. You may think, “Don’t the 49ers have Ted Ginn Jr.?” Yes, but he is not the most durable player on the team. In fact, I would have to label him as the complete opposite; Ginn is very undependable. It’s not a case of whether Ginn gets hurt; it is a matter of when. Once it happens, James better be ready to step into that role. I highly doubt they will let Kyle Williams back there after his two botched returns in the NFC Championship game.

Another player on this 49ers’ roster that has struggled to stay healthy is Frank Gore. If either Gore or Brandon Jacobs go down, LaMichael will have a chance to get some minutes as a change of pace back.

All in all, I like the addition for the 49ers. This team didn’t really have any needs per say, so this was just a luxury pick. James is a tough guy, a competitor, and a winner. I believe that he will fit in just fine with this 49ers team.

I will say it: LaMichael James will have a decent career in the NFL. He will be very similar to other former Ducks running back, Jonathan Stewart. A little bit of a mix between Stewart and Darren Sproles. He won’t be an every down back. He will play some special teams and get a lot of action in the passing game.

The 49ers are ready to win, and win now. They have the toughest defense in the league and a whole lot of talent on the offensive end. All they need is for their new wide receiver corps to step up this season. LaMichael’s speed will just add to their ability to spread the field and put up numbers like they did against the Saints this past post season. LaMichael should feel at home because he is joining a dominant team. A similar situation he stepped into at the University of Oregon.

Be sure to check out other great articles at Oregon Sports News.

This entry was posted on April 30, 2012 by wademcmillin. It was filed under NFL and was tagged with 49ers pick lamichael james, 49ers running back situation, Heisman trophy, how will lamichael james fit in as a 49er?, lamichael james, NFL, nfl draft, oregon ducks, San Francisco 49ers.