Tank time for the Philadelphia 76ers?

BY RAY HAGAN, Courtesy of feedcrossing.com 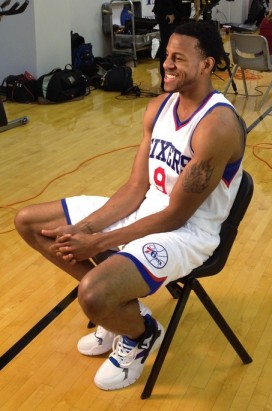 The Philadelphia 76ers were seen as a promising young team coming into the 2011-12 season. Thanks to a schedule-aided early season run of dominance, some national pundits began to muse that maybe this team was better than they’d given it credit for. Doug Collins was garnering talk as Coach of the Year; Lou Williams was a potential Sixth Man of the Year; and Andre Iguodala was, if not living up to his extension, at least not playing well beneath it.

Now here we sit, just after Easter Sunday, the NBA Playoffs looming and the once-promising Sixers season is unravelling faster than the mummy in Monster Squad (dated reference No. 1). There are rumblings that players want Doug Collins out, Spencer Hawes hasn’t been the same player since his return from injury, suddenly Iguodala is sniping at teammates (at least those shots aren’t missing.) And the team is clinging to its playoff life by one game against Milwaukee.

Which leads to the real question. As a ‘Sixers fan, do you even want this team to make the playoffs? I know, that as a “true fan,” no follower should ever want their team to lose, but sometimes you have to take one step back to take two steps forward. In the NBA, more than any other league, getting from the middle of the pack to the top is tougher than getting from the bottom to the top. That’s why I say it’s time to blow this thing up. It’s time to dismantle this roster like a building in the game Rampage (dated reference #2).

It’s obvious by this point that Jrue Holiday and Evan Turner can’t coexist. Both players need the ball in their hands to be successful. One of them has to go. Iguodala has gone from a potential glue guy to a possible cancer. He’s not theNo, 1 scoring option on a legit contender. He needs to be the poor man’s Metta World Peace. Thankfully his trade value has never been higher. The ‘Sixers won’t get a tremendous player for him, but they can get a piece that helps, instead of trying to fit this square peg into a round hole.

Elton Brand must be “amnestied.” They might as well call it the Elton Brand rule. He’s tailor-made for the amnesty clause. He jumps about as high as me on a pogo ball (dated reference #3). Those who said along with me the ‘Sixers should have signed Josh Smith instead of Brand can now begin saying, “I told you so.”

Finally, the Sixers absolutely positively must do two things:

1.) The Sixers must miss the playoffs. A lottery pick is essential. The odds of landing a top pick are minuscule, but minuscule is better than non-existent. Moreover, this is a deep draft even a late lottery pick could yield a legitimate talent.

2.) Doug Collins must be retained as coach. Collins has to come back and out his heart and soul into the new Sixers core and try to teach them how to win. No one brings the passion that Collins does and he has this team with Brand who can barely move playing NBA-best defense.

This is a team that needs to have the old flushed out and the new blood brought in. If you’re a true ‘Sixers fan, you need to root not for wins, but for one step back and two forward.