Behind the scenes of the 2012 NCAA men’s basketball tournament

Couchsideshow.com blogger Stayson Isobe poses before a game at the NCAA men's basketball tournament in Tempe, Ariz. Isobe worked at the West Regional of the tournament, gathering quotes for the NCAA.

Last week, I was fortunate enough to have the opportunity to work the NCAA Men’s Basketball West Regional in Tempe and what an experience it was.

For those that don’t know, when I’m not moonlighting as a Couch Side writer, I work at Northern Arizona University as a graduate assistant in the media relations department as the Sports Information Director for the Lumberjack women’s soccer and men’s and women’s tennis programs.

This past fall, Arizona State, the host of last week’s West Regional Sweet Sixteen and Elite Eight games at the U.S. Airways Center, asked our media relations department if we would like to volunteer at the games and really who would turn down an opportunity like that? Well the four of us in the department as well as our assistant AD for marketing made the trip down to the Valley last Wednesday and I can’t lie, I was stoked (and again who wouldn’t be?)

Upon arrival at the U.S. Airways Center, the home of the Phoenix Suns, we made our way to the media press conference room. Immediately I was amazed by the rows of tables set up for media members from across the country and the press conference seating area on the stage which would soon be the scene of the Regional’s star players and the incredible coaches that would lead them into battle for a spot in this year’s Final Four.

Of course we had to eat, so it was then off to the media buffet area. Need I say more than free food? After filling up on chicken tenders and hot dogs (again I’m not complaining, it was free!) we got our first assignments. We would be in charge of gathering locker room quotes from the players that would not be speaking to the media in the press conference room. I was assigned to Louisville, so instantly I read through their media guide and tournament notes to gather as much information as I could about the Cardinals.

After learning as much as I could about the Big East Tournament champions, I made my way to the locker room where the players were sitting around following their first practice on the U.S. Airways Center courts. My three player selections to interview: Gorgui Dieng, Chane Behanan and Kyle Kuric. Of course I would’ve loved to speak with starting point guard Peyton Siva, but he was on his way to the press conference room so opportunity lost. I’ve never been one to get nervous during interviews dating back to my days as a member of The Lumberjack sports section, but this was clearly a level I’ve never been at before.

The interviews went well and it was cool just to introduce myself and tell these guys I was gathering quotes for the NCAA! After speaking with the three players, my next duty was to transcribe the quotes, which was then placed in quote packet along with a transcription of the press conference for Louisville and distributed to the media for use. Who knows, maybe my quotes were used in a story for the Louisville/Michigan State game in some newspaper somewhere in the country? 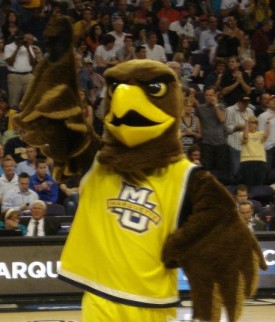 The Marquette Golden Eagle pumps up fans at the West Regional of the 2012 NCAA men's basketball tournament. Photo by: Stayson Isobe / Couchsideshow.com © 2012 All Right Reserved

That was really my only job on the first day, so I spent the remaining part of the day listening to Buzz Williams (Marquette head coach), Tom Izzo (Michigan State head coach) and Billy Donovan (Florida head coach) among others speak to the media in the media room. I also got to stand courtside and watch these four teams practice in preparation for their games the following day, which was amazing. I couldn’t believe I was watching these first class basketball programs with first class coaches leading the practice right in front of me! Not to mention, I got to see Reggie Miller, Len Elmore and Kevin Harlan (the broadcasters for the game) as well as they sat watched the practice sessions from their courtside seats.

The following day was game day and I was eager to head back to the arena for what would be the most exciting basketball games I’ve ever had the chance to watch live in person. There wasn’t much to do pregame except for another trip to the media buffet! My stomach satisfied, it was then time to get our game day assignments, which in my case was distributing halftime and postgame stats to my designated media area. There were 60 media members just in my row alone! One thing that I found astounding was that we could not hand out the starting lineups for the first game of the afternoon no sooner and no later than an hour before tip-off.

Aside from my halftime and postgame responsibilities, I was free to watch both games from the sweetest seat I’ve ever had to any live sporting event (well other than the ones I work here at NAU). I was just a normal fan in awe from my seat across the benches in the first row behind the media. If it didn’t hit me that I was actually watching Sweet Sixteen basketball before, it was at the tip-off of the Michigan State/Louisville game that I was here and this was really happening.

Of course, the West Regional portion of my bracket was busted that day as both Michigan State (the top seed in the Regional) and Marquette (the third seed) lost one game shy of my prediction of them making it to the Elite Eight. Nevertheless though, I saw two excellent games that featured a handful of potential NBA prospects including first-team All-American and Big Ten Player of the Year Draymond Green (Michigan State), Big East Player of the Year Jae Crowder (Marquette) and First-Team All-SEC selection Bradley Beal (Florida).

Not to mention that both Dieng and Behanan were the players that were invited to the press conference room to accompany head coach Rick Pitino after Louisville’s win over Michigan State. I guess I did a good job picking the key players to interview the day before? After all, Dieng (5 points, 9 rebounds, 3 steals and 7 blocks) and Behanan (15 points, 9 rebounds, 3 steals) were key in limiting Green to just 5-of-16 from the field! 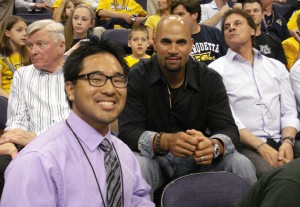 If all of this wasn’t enough, I was in the presence of huge names in the sports world including Magic Johnson, Muhammad Ali, Steve Mariucci, Kirk Gibson and Tony La Russa. But none of them mattered more than the guy that I happened to be sitting right in front of the entire night: Albert Pujols. As a die-hard and lifetime Angels fan, I could not believe he was right behind me and I didn’t even know! Best described as the closest I’ve ever gotten to hyperventilating, I very nervously told him that I was a huge Angels fan (whether he actually believed me is another question) and shook his hand before asking for his autograph and getting a picture with him! To think I met the greatest hitter of my generation and newest $240 million member of my Angels is absolutely surreal to me and days later I’m still in shock. I spent two whole days at Angels spring training to come up short and here he was at the Sweet Sixteen games I happened to be working and he was just a row behind me. I guess I’ll always have the game lineup card with his autograph on it to remind me of that exact moment.

In all, it was two days I’ll never forget. Would’ve loved to have spent the final two days there to catch the Elite Eight game, but my beloved tennis teams were playing up in Flagstaff and my actual responsibilities called. Still, to have that experience is something not everyone gets to enjoy.

I got to see three coaches with national championships to their name in action and speak to the national media. I saw maybe the greatest point guard in the history of the NBA and got the autograph of the new star of my favorite sports team of all, a guy that is already mentioned along the likes of Ruth, Mantle and Aaron. I spoke with Rick Reilly and told Rick Pitino congratulations after his win. And that’s just a few of the things that made those two days two of the best I’ll ever have in my entire life.

How many people get to do any of that, much less all in a two-day span?

A dream come true beyond my wildest imagination, that’s the only way I can describe it.