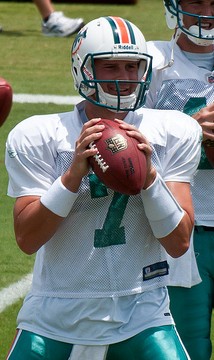 I didn’t believe the Jacksonville Jaguars would be relevant this NFL offseason.

The Jags showed that they are determined to get better in 2012-2013 by upgrading their offense very early into the NFL Free Agency period. Jacksonville went after skill positions, agreeing to terms with quarterback Chad Henne and wide receiver Laurent Robinson. Now, Henne may not be the sexiest signing, but Floridians should be ecstatic about the Jaguars landing Robinson.

There’s no doubt Jacksonville needed a wide reciever. One look at the team’s depth chart would leave most NFL fans scratching there heads, asking who is this guy? Mike Thomas proved to be somewhat of a bust as Jacksonville’s primary receiver last season and when the hands behind him are the likes of Jarett Dilliard and Chastin West, there’s not much hope for a quarterback — especially when Blaine Gabbert is under center.

So instead of accepting mediocrity like the Jaguars have been know to do, Jacksonville went after a playmaker. Some may argue that Robinson hasn’t earner that title quite yet, but I expect big things from the Illinois State prodigy. And my proof is how the six-year pro, who was released twice last season, stood out with an offense full of weapons. Yes, Tony Romo had a lot of talented targets last season. Little did we know that Miles Austin and Dez Bryant wouldn’t be the top ones. Injury definitely played a factor, but that shouldn’t discredit how Robinson performed last year at all.

The 6-foot-4, 194-pound ball catcher was No. 2 for Dallas in receiving yards — falling only to former first-rounder Dez Bryant — with 858 on 54 catches, averaging an impressive 15.9 yards per grab. He also scored 11 touchdowns, which ranked third in the entire NFL. To compare his to any of Jacksonville’s receivers from last year’s team would simply be unfair, but it shows how much he will bring to this struggling team that finished the 2011-2012 campaign with a shameful 5-11 record.

Last season, every Jaguar receiver combined caught just 12 touchdown passes, which happened to be just one more than Robinson caught by himself in 2011. And if that number wasn’t pitiful enough, the Jags’ top two receivers last season — Thomas and tight end Mercedes Lewis — combined to haul in just 885 yards, which is just one short pass more than how many Robinson recorded last season.

Again, no one can argue or even come close to defending the Jaguars pass offense. It’s flat out pathetic. But at least they’re trying to do something about it. Gabbert was by far the worst QB in the league last season, yet he’ll always be able to blame it on the rawness that comes with being a rookie. Mark my words, however, that Gabbert will eventually be benched by Henne. It should happen before the season starts, but Jacksonville’s coaches have already said they signed Henne to push Gabbert, who the Jaguars selected 10th overall in last year’s NFL draft. I don’t believe Henne will be on the bench for long, however.  The former Miami Dolphins quarterback didn’t get much of a chance with the team that drafted him in the second round  during the 2008 NFL draft. So expect Henne to be gunning for that No. 1 spot. And with a guy like Gabbert holding it down, it won’t take long before he is the new starting quarterback of the Jacksonville Jaguars.

Trust me, it won’t be hard for coaches to pick between Gabbert, who recorded an embarrassing QB rating of 65.4 last season, over Henne, whose life rating is 10 points higher. New coach Mike Mularkey has a tough decision ahead and some real duds to make it with.