Tribute to Gary Carter: The passing of a good guy

Gary Carter’s unfortunate, and to some of us, unfair death due to brain cancer has left us with questions. It’s never fair when anyone dies of cancer; on this I’m sure most of us agree. However, one cannot help but press our lips together and shake our collective heads in wonder as the major news outlets, while scrolling news of Carter’s death along the bottom of the TV screen, spent last week camped out adjacent to New Hope Baptist Church in hopes of finding out the latest details of the late Whitney Houston’s imminent funeral.

Houston’s death, while tragic, has resulted in the deification of a woman who could sing like no other. But she played too hard. Period.

Carter, on the other hand, played hard because it was his job. Playing catcher is considered by most baseball writers, fans, players and coaches as the toughest, most demanding position on the diamond. But Carter, a Hall of Famer, when he left the locker room after a win or loss, went home to his wife, his children, and his Bible.

Houston was the “Queen of the Night,” Carter simply was known as “Kid.”

Interesting, isn’t it, these two stars of their respective professions, who excelled at basically the same time, are now on the final journey at the same time as well. Houston’s singing career began in a church, but Carter’s church sustained him, even when his teammates teased him for his boyish approach to baseball. Hmm…

This writer certainly isn’t angry at Whitney Houston; not in the least. In fact, I’ve found myself walking around the house humming a few bars of her hits. She could flat out sing. 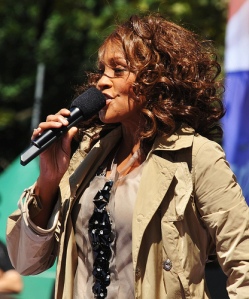 American singer Whitney Houston died at the age of 48 last week at the Beverly Hilton Hotel in Los Angeles.

But Kid. How can the media relegate his death to a four-paragraph brief in the digest section of page 3 of the Saturday morning sports section? This natural-born leader belted 342 home runs – quite a few of them clutch – and hammered in 1,200-plus runs, not to mention that without him, there is no way the 1986 Mets win Game 6 of that famed World Series, not to mention the series itself. The great Johnny Bench, perhaps the greatest catcher in Major League History, essentially handed Carter the torch in the mid-1970s. Carter carried it proudly, much to the dismay of his opponents, whom he regularly gunned down when they tried to steal second base.

So here it is … again, not mad at Whitney Houston. She made her choice. But she drank too much. She did drugs too much. And she ran with the wrong crowd. Bittersweet memories, that is all she is taking with her …

But for Carter, whose passion for the game, passion for life, and passion for winning are worth, as mlb.com writer Marty Noble said, one more curtain call, or as Houston would have sang, one moment in time. It is this writer’s hope, or perhaps the hope of the Met fan inside this writer, that your reward will be as wonderful as that which you provided us during your career.
Thanks Kid.

Vin Cappiello is a special contributor to Couchsideshow.com. We would like to thank “Cap” for letting us use his blog. You can read more of Vin’s blogs by visiting, http://www.ballino.blogspot.com.