Federer, Nadal not slowing down any time soon 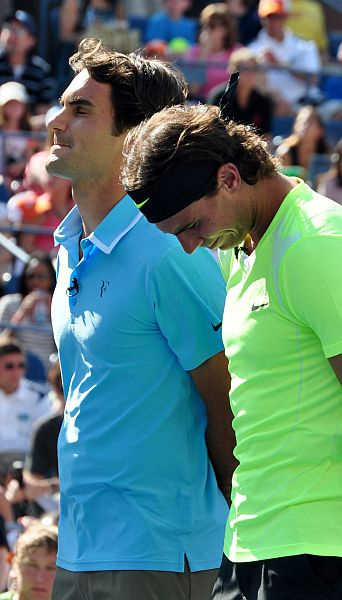 Domination is a popular and common term often applied to sporting performance. If anything, it is tremendously overused, and therefore its meaning has been diluted by the majority of sporting publications. The online Merriam-Webster dictionary defines domination as “supremacy or preeminence over another” and “exercise of mastery or ruling power.” Despite your initial thoughts, the premier example of nonstop and unrelenting domination in a professional sport isn’t found on the gridiron, hardwood court, or baseball diamond. It is found on the tennis court, in the form of Rafael Nadal and Roger Federer, two world class athletes who continue to consistently and unshakably demolish the rest of the field.

To put Nadal and Federer’s unbridled success into perspective, they have combined to win 26 of the last 34 Grand Slam titles ( Grand Slams constitute the U.S. Open, French Open, Wimbledon, and Australian Open). Since taking home his first win at the U.S Open in 2003, Federer has gone on to earn 15 other Slams, and finish as runner-up seven times. The current #3 ranked player in the world possesses a tremendous 810-186 singles record and has won 70 career singles tournaments and 8 doubles tournaments. So far, Nadal has 10 Grand Slam victories under his belt, cementing himself as the King of Clay by winning six titles at the French Open. The 25-year old Spaniard is currently ranked #2 in the world and boasts 46 career singles titles and a 544- 117 singles record.

END_OF_DOCUMENT_TOKEN_TO_BE_REPLACED 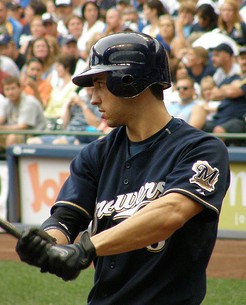 “The best thing he (Alex Rodriguez) can do is come out, admit to everything and be completely honest. The situation will die a lot faster if he tells the whole truth.” That was Ryan Braun’s response when asked about A-Rod’s link to performance enhancing drugs in 2009.

“Sometimes in life, we all deal with challenges we never expected to endure. We have an opportunity to look at those challenges and view them either as obstacles or opportunities. I’ve chosen to view every challenge I’ve ever faced as an opportunity, and this will be no different.”

END_OF_DOCUMENT_TOKEN_TO_BE_REPLACED 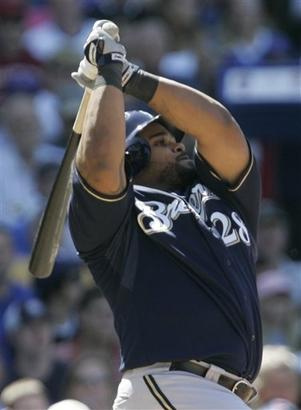 Looks like I’ll have to eat my own words that Prince Fielder was going to be a Washington Nationals. I was so far off, I didn’t even guess the right league as the Detroit Tigers swooped in — completely out of left field — to sign the free agent first baseman to a nine-year, $24 million contract Tuesday afternoon.

Fielder and the Tigers shocked the baseball world by coming to terms to the fourth largest contract in MLB history. The historic deal also proved that Fielder won’t be settling after teams like the Seattle Mariners, Texas Rangers, Baltimore Orioles and Washington Nationals persuaded him heavily, but didn’t dish out the dough quite like Detroit. It seemed and was reported that Washington was the front runner, offering the 27-year-old a deal a little less lucrative than the one he landed. But instead, the former Milwaukee Brewer will be in the motor city — where his father shined for seven year — until he is 36. Here is how this blockbuster move could upstage Albert Pujols‘ deal and how it makes the Tigers quite possibly the best team in the American League.

END_OF_DOCUMENT_TOKEN_TO_BE_REPLACED

It’s been written about, bandied about, and talked to death probably a million times by now, but the behavior of the Penn State student body continues to amaze even the most even keel of sports fans.

And yes, we know it’s only a few that ruin it for the majority by tipping over media vehicles, and claiming that the Penn State faculty board “killed” their beloved Joe Pa, but any semblance of dignity or integrity seems to have been lost on the current incarnation of “We are PENN STATE.”

That’s the funny thing, too; everyone who lauded the late Paterno spoke highly of the integrity, class, and humility that he brought to the program, turn around and do the exact opposite. This is not an indictment of Paterno, or the mistakes he made at the end of his career, but the legacy that is left behind seems to have been lost on those more interested in stirring the pot, rather than taking the high road.

END_OF_DOCUMENT_TOKEN_TO_BE_REPLACED

You can call him the master of the miss, the sultan of shank or a klutz in the clutch.

Call him what you will, but if you were the New England Patriots on Sunday, you had better show Baltimore Ravens kicker Billy Cundiff some mad respect. The nine-year, undrafted kicker completely shanked a 32-yard field goal with 11 seconds remaining in the AFC Championship game Sunday in Foxboro, Mass. The botched chip shop would have forced overtime between the Patriots and Ravens, but instead it sent New England to its seventh Super Bowl appearance in franchise history. The Patriots won the game 23-20 and will now face the New York Giants on Feb. 5 for Super Bowl XLVI in Indianapolis.

The kick will undoubtedly go down in history as what could have been for the Baltimore Ravens. If Cundiff would have been able to make a kick that most kickers can nail in their sleep, Baltimore would’ve at least had a shot at upsetting one of the greatest teams football has ever seen. But as we all know by now, Cundiff missed, eliminating his team from the 2011-2012 NFL Playoffs.

Now I have heard of Billy Cundiff since he entered the league in 2002 with the Dallas Cowboys. But the former pro bowler’s missed kick made me want to learn more about him. Obvious questions prompted me to do some research. As I started to stare at Cundiff’s statistics, the first one I had to look at is how accurate the guy is between the 30- and 40-yard line. To my surprise, he’s 76 percent for his carreer. Not the best, but also, not the worst. But he has been at his best from that distance in the past two season. During that span, he was well over 80 percent and a top 10 kicker from that distance. Actually, Cundiff has been one of the league’s best for the past two years and earned a pro bowl nod last season for his kicking abilities.

END_OF_DOCUMENT_TOKEN_TO_BE_REPLACED

Paterno shouldn’t be remembered for scandal

College football lost one of its best in Joe Paterno on Sunday. 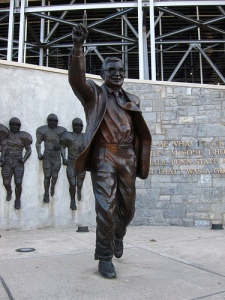 A statue of Joe Paterno outside of the Penn State's football field should remind people how dedicated he was to the university. Photo by: seng1011 / Flickr

The famed Penn State coach died just 65 days after being diagnosed with lung cancer and about three months after coaching his beloved Nittany Lions for the final time. He will forever be remembered as Penn State’s Joe Pa, a loyal leader and friendly face to his players and the student body. Unfortunately, some people outside of Penn State may only remember Paterno for the scandal involving his former replacement, Jerry Sandusky.

Critics from everywhere surfaced when Paterno was sadly forced to leave Penn State, slinging mud at the man headlines are calling “a flawed hero.” Yes, he made some questionable mistakes by not whistle blowing on his assistant coach. However, how are we to know how much Paterno actually knew about Sandusky’s inexcusable action? And from my understanding, Sandusky’s wrong doings were reported all the way to the top, which in turn did nothing.

It is former Penn State president Graham Spanier and former athletics director Tim Curley who should be remembered as the behind-the-scenes transgressors of the Sandusky scandal. Alas, Paterno’s name will be forever linked — closer than any of his colleagues — to Sandusky’s sins. It caused him a great deal of stress in his final months and the heartache from the entire affair more or less killed the poor man.