The 2011 Super Bowl will feature a rematch of 2008’s classic Giants–Patriots showdown. The Giants are coming in hot, but the Patriots are the favorite to hoist the Lombardi Trophy. Couch Side Show bloggers Chuck Constantino and Trevor Gould weigh in on the matchup.

TCG (Trevor Courtland Gould):  Tom Brady, the one and only. He is too good, too clutch, and too fearless to be denied his fourth Super Bowl championship. He has established an unshakable rapport with his receivers and tight ends, and at the end of the day is one of the greatest players to ever set foot on a football field.

CC (Chuck Constantino): Tom Brady. His drive and determination are second to none. Brady holds total control of his offense and will simply play chess with the giants secondary. While Eli Manning is on fire right now, his receivers are constantly bailing him out on questionable throws. For every dime Manning throws, there’s sure to be a few more ducks.

TCG: The Giants’ one-two punch of Ahmad Bradshaw and Brandon Jacobs will cause fits for the Patriots’ horrendous defensive front. Ahmad is quick, versatile, and elusive, while Jacobs runs straight over people. They’re a great combination because the defense has to quickly adjust to two completely different running styles.

CC: The lightning and thunderous duo of Bradshaw and Jacobs will wear down the Patriots defensive line, opening up the play action for Eli. The Patriots have lacked a consistent run game all season and will lean on the running back by committee approach. 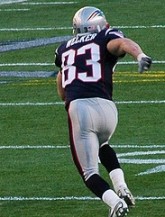 TCG: If the Giants were facing any other team, I’d give the advantage to their stellar wide receiver trio of Hakeem Nicks, Victor Cruz, and Mario Manningham. But the Patriots lethal wide receiver/ tight end combination is nigh unstoppable. This season, zero defensive units have had an answer for Rob Gronkowski and Aaron Hernandez, the two hulking tight ends who cause matchup nightmares. They’re too athletic to be covered by most linebackers, and they tower above virtually all cornerbacks and safeties.  Plus, it doesn’t hurt to have speedy Wes Welker occupying the slot and Deion Branch running those deep routes.

CC: These two teams are very similar in that they spread the ball out to multiple receivers, but Gronkowski, Hernandez and Welker have combined for 291 receptions this season and being able to stop all three will be the key to success for the Giants. I don’t see that happening. I will predict a Salsa dance from Victor Cruz.

TCG: The Giants possess a tight knit and experienced front consisting of Chris Snee, Kareem McKenzie, David Baas, Kevin Boothe, and David Diehl. They have been playing together for many years and share a tight bond with Eli Manning. They are tough and stubborn, and one of the main reasons Eli has enjoyed so much success this season.

CC: Veterans Matt Light, Logan Mankins and Brian Waters have shielded Brady alongside tomato can Dan Connolly and rookie Nate Solder to the best they can, giving up 32 sacks all season compared to the Giants 28. However, the Pats are deep on the offensive line with experienced subs.